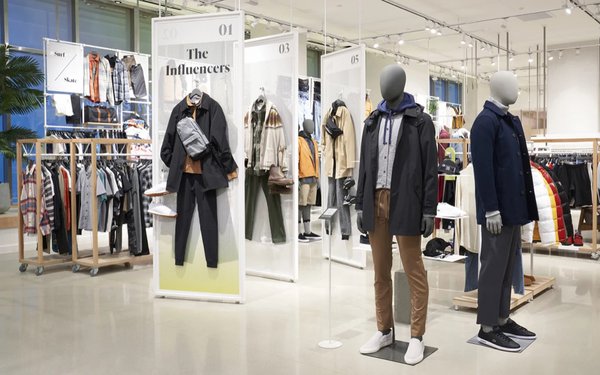 Amazon is bringing Amazon Style, its first real-life clothing store, to a Glendale, California mall later this year. And the tech behind the initiative is likely to intrigue retail competitors as much as the fashion.

In its announcement, the Seattle-based company says shoppers will be able to browse men's and women's clothing and shoes, looking at familiar brands as well as up-and-comers.

Using the Amazon Shopping app, they can scan a garment's QR code to learn about the item, read reviews and select it to send to the fitting room. Once there, they'll have additional touchscreens, allowing them to request items in more sizes and colors.

The news isn't particularly surprising, says Dan Romanoff, a senior equity analyst who covers Amazon for Morningstar. "Amazon has long experimented with many physical retail formats, including Amazon 4-Star, Fresh and Go, as well as bookstores," he tells Marketing Daily. "And news of this store started leaking about six months ago. It seems like an obvious move."

Romanoff says the initiative is also a smart one, especially in building Amazon's private-label businesses, an extensive collection with names like Goodthreads, Amazon Essentials, Lark & Ro and Daily Rituals.

"Every sale will make Amazon money," he says. "But it will make more money on sales of its own labels."

The first Amazon Style will open at The Americana at Brand, a Los Angeles county shopping center already home to Amazon 4-star, Madewell, and stores like Lululemon, H&M, Tiffany and Nordstrom.

And while Amazon has an advantage in its reputation for prices, selection and convenience, it's certainly not alone in its efforts to make omnichannel retailing more appealing.

Nordstrom, for example, has been building Nordstrom Local stores for several years, small hubs aimed at blurring the lines between offline and online exploration.

This push toward experiential retail is "the wave of the future," says Michael Prendergast, managing director, Alvarez & Marsal Consumer and Retail Group, a professional services firm specializing in business transformation. "The next large wave of growth will come when digitally native brands can actually crack the code on entering brick-and-mortar retail. But to do that, they have to unlock the experiential relationship with their customers. They need to apply the same interface successes they have online with a real live store and real-live customers," he tells Marketing Daily in an email. "This is much easier said than done."

Amazon already has a partnership with Kohl's, allowing customers to return items to that chain's 1,200 stores.

The most intriguing part of Amazon Style may not be fashion, but the tech behind it. The company says it's equipping the store with the same technologies and processes as its fulfillment centers, to summons items from the back of the house to a customer's fitting room in minutes.

Amazon’s layering that tech with advanced machine learning algorithms, so it can offer personalized recommendations that match style, budget and fit.

It also offers Amazon One, which lets people check out using only a palm print.

While the announcement is likely to make department stores nervous -- as if they haven't been sweating about Amazon for decades -- Romanoff isn't predicting that Amazon Style stores will crop up in malls all over the U.S.

"If it opened up 25 locations, that wouldn't surprise me," he says. "It is always looking for more touchpoints -- even if this becomes nothing more than a way to return packages. I don't expect this to be a giant thrust for Amazon.”

Romanoff says it's important to keep in mind that, for Amazon, immediate sales are typically not the goal  -- learning more about consumers is.

"Amazon is always in it for the long haul," says Romanoff, "and it is always looking for iterative insights."