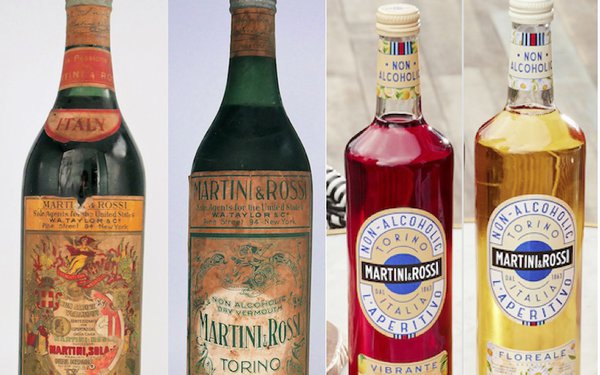 Images above, from right: Two bottles of non-alcoholic vermouths from 1922, compared to their modern-day equivalents.

A hundred years ago, in response to the government-mandated Prohibition in the U.S., Italy’s Martini & Rossi launched its first three non-alcoholic vermouths, in sweet, sparkling and dry variants.

Now, in response to “the recent rise in sober-curious consumers” and “a heightened desire for mindful cocktails” worldwide, Martini & Rossi has taken the same wines used in its vermouths, removed the alcohol and infused them with botanicals for a soft launch of two non-alcoholic aperitivos: Floreale, with notes of chamomile, and Vibrante, with notes of bergamot oranges.

The brand, which merged with Bacardi in 1993, pointed to data from Bacardi’s 2022 Cocktail Trends Report showing that 58% of people globally are drinking more non-alcoholic and low-alcohol cocktails in comparison to a year earlier

No similar statistics exist from a century ago, but it’s fair to say that consumption of alcoholic beverages was down substantially -- in the U.S., that is. The start of Prohibition in January 1920 had cut off that market from Martini & Rossi, and that November, the company began formulating its non-alcoholic vermouths, with the first 5,000 cases shipping in July 2022.

But when Prohibition ended in December 1933, and with no “sober-curious” market or “desire for mindful cocktails,” so too ended Martini & Rossi’s non-alcoholic adventures for nearly 90 years.

During Prohibition, Martini & Rossi’s non-alcoholic beverages were supported by ads in such prestigious publications as Vogue and Vanity Fair, de Rusch noted.

For the current soft launch in select markets in advance of national expansion in 2023, marketing consists of retail sampling and displays,as well as private tastings at a few events (e.g., Seattle Cocktail Week, Arizona Cocktail Week, Tales of the Cocktail, Charleston Cocktail Week).

Consumers nationwide, however, can get non-alcoholic Floreale and Vibrante as part of a Mindful Hosting cocktail kit being sold through ecommerce site Cocktail Courier.