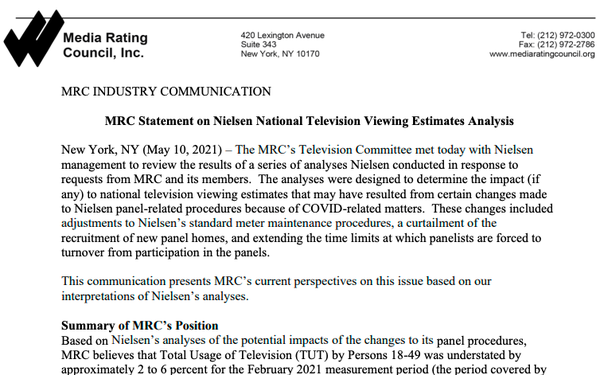 The characterization of the Media Rating Council’s analysis of Nielsen’s pandemic-affected undercounting of linear TV viewers by the VAB, the national TV ad trade group, isn’t a correct "representation," according to the MRC.

A report by the VAB this week that cited undercounting with out-of-home TV viewing made references to the MRC, the media measurement certification group, making an “adjustment factor" when it came to the linear TV undercounting over the March 2020 to May 2021 period of the COVID-19 pandemic.

This is not correct, the MRC says.

For the better part of a year -- March 2020 to March 2021 -- Nielsen was unable to service its national TV panel of approximately 40,000 households, due to pandemic restrictions. The VAB said this resulted in undercounting of TV impressions.

“February 2021 was chosen as the subject of the analysis at the time because MRC believed it represented the period at which the potential COVID-related impacts to Nielsen’s panels were at their peak,” the MRC said in a release.

It added: “The figures MRC published in May 2021 were presented simply as estimates of ratings understatements that MRC believed occurred in the single month of February 2021.”