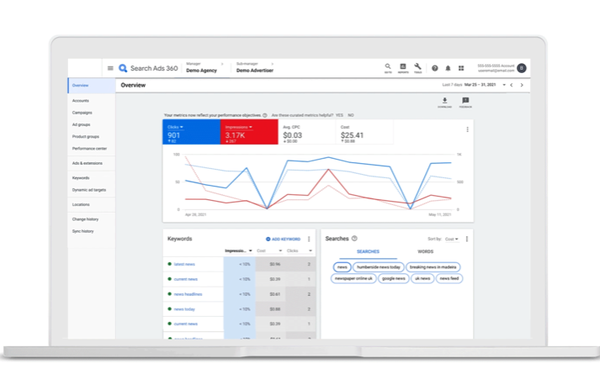 Google has updated Search Ads 360, its enterprise campaign management platform, to include support for newer Google Ads features such as Performance Max and Discovery campaigns, and other search engines, the company announced Tuesday.

One major feature is the ability to manage ads across different channels, including other search engines.

Marketers will have improved support for other channels and search engines, like Microsoft Advertising and Yahoo Japan, features like Dynamic Ads for Search and sitelink extension. Google has also built new enterprise features that are only available in the new Search Ads 360.

Google redesigned Search Ads 360 using the same technology that powers Google Ads. The changes will begin rolling out during the next few months.

The company also made upgrades to “Performance Center,” which Google will launch later this year.

Google calls it an “improvement to budget management that provides features beyond simply managing budgets. The idea is to improve forecasting across search engines where marketers can explore different hypothetical scenarios to plan your media budgets.

Alex Epshteyn, executive director at Fifty-five, part of The Brandtech Group, formerly known as You & Mr Jones, believes it is valuable that Google provides options to automate optimization and allow for manual configuration and changes.

“As with all new features, it's of course worth testing and conducting an A/B test of these new auto-optimizations against a campaign optimized manually,” he wrote in an email to Inside Performance. “If the test is showing conclusive, positive results, then it's worth scaling. Since there are 20 or more features that can be automated for optimization, I'd advise not to enable them all at once, but determine a testing path and prioritize the features so results are clear.”

The interface browser also has been updated with features from Google Ads and Microsoft Advertising user interface.