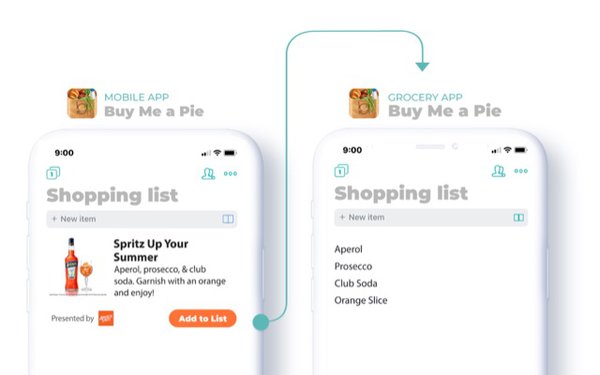 Alcoholic beverage brands like Campari and Heineken are increasingly using in-app ads that get consumers to add items to their shopping lists, according to an analysis by the AdAdapted platform.

In late 2020, seeking to get people drinking the summery Aperol Spritz during the winter, Campari used a six-week campaign from Mindshare that featured two ads, each with a cocktail recipe. When the recipe was clicked, Albertson’s and Safeway shoppers added both the Campari products and other cocktail ingredients to such shopping list apps as Buy Me a Pie! and Out of Milk.

In combination with the use of keyword Intercept terms and a consumer poll, the campaign resulted in a $3.40 incremental return-on-ad spend (ROAS) at the two retailers, a 0.37% add-to-list rate -- and a 9.9% rise in incremental sales, amounting to $175,000.

In another campaign, Michigan craft brewer Short’s Brewing Company achieved $3.86 in incremental ROAS, a 0.31% add-to-list rate, and a 99.8% increase in “incremental list adds,” defined as shoppers who did not previously have Short’s on their shopping lists, and 77.7% “conquested customers,” defined as shoppers who previously had competitive brands or generic versions of specific products on their lists.

In a case study, Short’s creative and marketing manager Christa Brenner said that list-building apps “felt like a solution that was one step closer in the consumer journey to getting our products in carts.”

AdAdapted also reported increased use of shopping list marketing by many other alcoholic brands once the pandemic started.