Gen Z Watches Nearly As Much TV As Short-Form Video 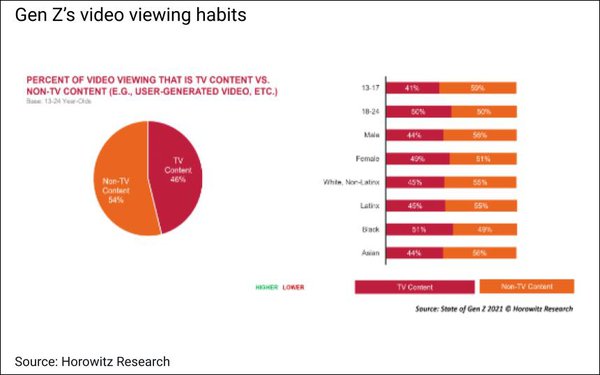 Are Gen Z consumers watching only TikTok and other short-form videos? Have they abandoned watching traditional TVs?

Far from it, according to Horowitz Research’s new State of Gen Z 2021 report.

Across the full sample, share of viewing time is also fairly evenly split, with short-form video at 54% and long-form video at 46% (chart above).

Short-form’s share of time is a bit higher among the youngest Gen Zers — 13- to-17-year-olds — compared to the older group, and among males.

The viewing share splits are also very similar across white, Latina Asian and Black Gen Zers. (The survey of 800 was nationally representative, but the study included oversamples of Hispanic, Black and Asian Gen Zers, according to Horowitz.)

In addition, contrary to popular belief, Gen Zs do watch on traditional TVs, as well as smartphones: 91% report using their smartphones every or almost every day, and 66% report the same about TVs. Six in 10 say they have a TV set in their bedrooms.

Gen Zers use an average of 5.5 streaming services to stream TV content — fewer than among adult streamers, who average 7.5 services used regularly, according to Horowitz.

While Netflix is the most popular service (78% of Gen Z streamers using it regularly). But Disney+, Hulu, Amazon Prime Video and HBO Max, are also heavily used, as are free services like YouTube (for TV content) and The Roku Channel.

The most popular TV genres among Gen Z include movies, animated series/cartoons, dramas and anime. But 55% report watching at least some live TV content on a weekly basis.

“It’s important for marketers to keep in mind that media consumption among Gen Z is not about absolutes,” stresses Adriana Waterston, Chief Revenue Officer and Insights & Strategy Lead at Horowitz. “It’s not true that they ‘never’ watch long-form TV content, that they ‘never’ use a screen other than their phones, or that they ‘never’ watch live TV. Understanding that there are nuances of Gen Z’s media habits gives marketers and media brands the opportunity to increase engagement and create unique experiences for this generation of digital natives across multiple platforms and through a variety of formats.”

“While the platforms and technologies they have are different, we all share the desire to sit back at times and be drawn into compelling, high-quality long-form entertainment,” she notes.