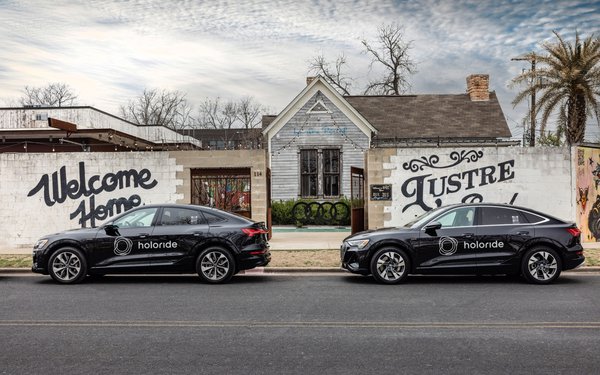 AUSTIN, Texas — Audi of America offered South by Southwest festival goers a glimpse of in-vehicle entertainment of the future.

The automaker partnered with startup Holoride to show how it plans to transform the automobile into an experience platform for virtual reality.

Beginning in June, select Audi vehicles with the MIB 3 infotainment system will be Holoride-capable. The VR or or XR (extended reality) technology merges virtual-reality content with driving movements in real time.

Back-seat passengers can put on virtual reality glasses and immerse themselves in various media formats including games, films and interactive content. Eventually, autonomous driving could mean that drivers will also be able to use the technology to pass the time.

Holoride has established a new media category called “Elastic Content,” which is content that adapts to driving movements, journey time and driving route. The result is an immersive experience with a previously unknown level of quality, according to the company.

Motion sickness — a complaint by some users of cell phones in a moving vehicle — is alleviated because the virtual content adapts to the driving movements of the car in real time, says Tri Duong Tran, senior director technology at Munich, Germany-based Holoride.

Tran was on hand in Austin last week to take festival attendees on a 30-minute ride in an Audi to demonstrate the system, which is simple to operate and gives passengers an option for passing the time.

With the system controlled through an app on a smartphone, passengers can play competitive games, such as one in which bubbles are burst and points are scored by using the correct color of ammunition. For a more passive and relaxing option, passengers can view 3-D movie trailers or other non-interactive content.

The technology will be available in Audi A4, A5, A6, A7, A8, Audi Q5, Q7, Q8, Audi e-tron and Audi e-tron GT quattro models in select markets in the United States, Canada, Europe, Japan and China.

Last year Holoride won the prestigious SXSW Pitch 2021 in the category of Entertainment, Gaming & Content as well as the “Best in Show” award. The company first presented the technology at CES 2019 in Las Vegas.