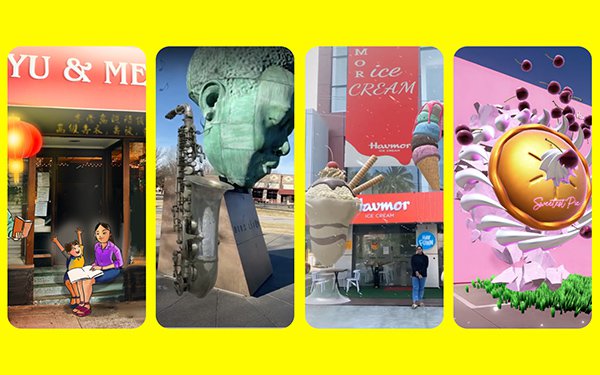 On Wednesday, Snapchat launched Custom Landmarkers, an update that will allow marketers and creators to develop custom location-based augmented reality (AR) experiences for locations they care most about.

This update stems from Landmarkers, a feature that Snap originally launched in 2019. The original version began with 30 celebrated sites around the world, like the Eiffel Tower, which shot rainbows, or Buckingham Palace, upon which little characters danced.

In 2020, Snap used 3D mapping to expand the focus to entire city blocks and squares with Local Lenses. That August, Snapchatters were invited to use their mobile cameras to splash red and blue AR paint across buildings in London’s Carnaby Street.

“We’re continually advancing the Snap AR platform so 250,000 Lens Creators can build the next generation of computing experiences that enhance the way we play, learn, explore, and shop,” reads Snap’s recent statement.

The new feature was teased at Lens Fest in December 2021, where Snap said its Lens Creators span over 200 countries and have made 2.5 million Lenses that have been viewed over 3.5 trillion times.

Custom Landmarkers further expands the feature’s scope by allowing Snapchatters and marketers to link their own AR creations to any location they choose. Through development on the Lens Studio, a brand can virtually transform one of its store’s logos, or use a local landmark to tell its virtual business story

Snap says Custom Landmarkers is discoverable through physical Snapcodes at the prescribed landmark, or on a Lens Creator’s profile. The company vets all Lenses before they go public.

Lens Creators who were granted early access to the feature have already launched AR experiences in their communities. In New York City, for example, creator QReal turned Yu & Me Books, the first independent bookshop owned by Asian-American women, into a paper pop-up book.

Other examples include a historical trip of Union Square in San Francisco, A Charlie Parker jazz show at a statue in Kansas City, and an AR performance by Dua Lipa and Meghan Thee Stallion on the Patti Smith wall in Los Angeles.

Some creators who had early access to Custom Landmarkers have said they were able to create location-based AR content in as little as one day. “This will hopefully hugely scale the number of locations that are enabled for augmented reality,” said Qi Pan, Snap’s Computer Vision Engineering director.

These creations are currently visible to users via Snap’s mobile app, but may eventually be available through Snap’s AR glasses.

In March 2021, The Information reported that Snap was developing a new version of its smart-glasses intended for creators and developers with built-in AR displays. With the rollout of Custom Landmarkers, these glasses could allow for a more engaging user experience.