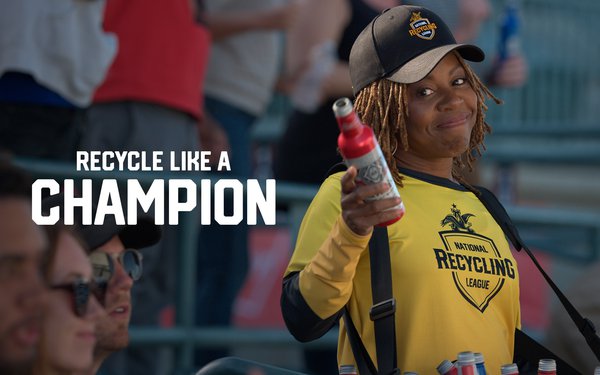 With the start of baseball season comes the time-honored call of in-stadium hawkers: “Get Your Beeeer Here!”

But this year, fans in more than 10 MLB ballparks may also hear something like: “Pass Your Recyclables Here!”

Anehuser-Busch today announced the debut of “Recycling Hawkers.” These volunteers from the company’s longtime nonprofit partner Keep America Beautiful will go up and down stadium aisles collecting used cups, cans and bottles.

The teams involved are not only members of Major League Baseball, but of A-B’s new National Recycling League, also announced today, which hopes to expand beyond baseball over the next year to also include franchises from the NFL and NBA.

All league members, and the MLB itself, have some kind of brand partnerships with A-B, with the league itself recently extending its 42-year-old sponsorship deal with the company for another four years.

“The National Recycling League aims to create meaningful connections between Anheuser-Busch's brands including Budweiser, Bud Light and Michelob Ultra, its league and team partners, and sports fans nationwide,” the company said in its announcement. This, it said, will “raise awareness of the need for recycling and drive key recycling behaviors among consumers wherever they cheer on their favorite team – whether it’s in-stadium, at home, or at a neighborhood bar.”

Each team, A-B said, has committed to reducing waste on game days through such activations as offering recyclable aluminum cups instead of single-use plastic, employing in-seat recycling decals, and posting in-stadium signage that states, “Recycle Like a Champion.”

To kick off the National Recycling League, A-B will award a “round of beer” -- via a $5 MasterCard -- to 1,000 people in the metro area of the franchise whose game attendees recycle the most bottles and cans through May 31.

A-B said the National Recycling League builds on its ongoing sustainability efforts like a commitment to making 100% of its packaging either returnable or made from majority recycled content by 2025.

The company has also been a member of the 12-year-old Green Sports Alliance for the past year. This nonprofit organization, whose members include leagues, governing bodies, colleges, teams, venues and corporate partners, promotes such sustainability practices as renewable energy, healthy food, water efficiency and safer chemicals, in addition to recycling.