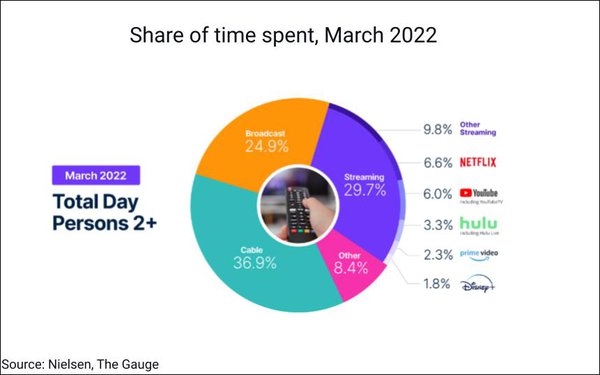 Overall U.S. TV viewing declined in March — as did overall streaming time — but streaming’s share of that viewing time rose to a new high of nearly 30%, according to Nielsen’s The Gauge report for the month.

Total TV usage dropped by 4.2% —  consistent with historical patterns as the weather turns warmer, according to Nielsen.

“Other” streamers — various smaller and specialty services including Crackle, Spectrum, DirecTV and Sling TV — continued to edge up in share, collectively claiming 9.8% in March versus 9.5% in February and 9.4% in January.

Despite the dip in total TV viewing, cable TV saw a slight gain in viewing time, and its share rose 1.5 points versus February, to 36.9%. Nielsen attributes this largely to viewers turning to cable for news of the war in Ukraine.

Broadcast programming lost more than a full share point —declining to 24.9% in March versus 26% in February —with sports viewing down 53% on a month-over-month basis.

Even with NCAA tournament and NASCAR viewing in March, the sports event programming’s share of viewing fell from nearly 25% in February — when viewership was elevated by the Olympics and the Super Bowl —t o 12% in March.

However, dramas saw a 17% increase in viewing time, driving their share to one-third of total broadcast viewing.