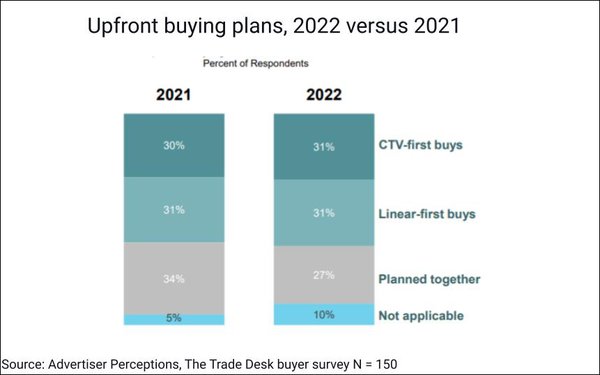 A new survey by Advertiser Perceptions and The Trade Desk confirms that advertisers are planning to increase their connected TV (CTV) commitments during this year’s upfronts — in part in anticipation of high demand and higher prices in the scatter market.

On average, buyers said they’ll allocate 53% of their CTV budgets for the upfronts. That’s nearly identical to their planned upfront allocation for linear TV: 54%.

More than a third (35%) said they plan to increase their CTV allocation during this year’s event compared to last year’s, 61% plan to maintain the same level, and 4% plan to decrease it.

In comparison, 23% said they plan to increase their linear allocation in this year’s upfront, 64% said they’ll maintain the same level, and 13% said they’ll decrease it.

In comparison, 27% said they’re planning combination buys. That’s down from 34% saying the same in last year’s survey —raising the possibility that combination buys are losing ground to CTV-only buys (an option that wasn’t included in the survey).

However, locking in lower prices to avoid scatter-market rate hikes isn’t the only reason for committing more CTV dollars during the upfronts.

"Buyers can fulfill all of these needs with the wide range of CTV inventory now available for upfront buying," says Nicole Perrin, vice president, business intelligence, at Advertiser Perceptions. 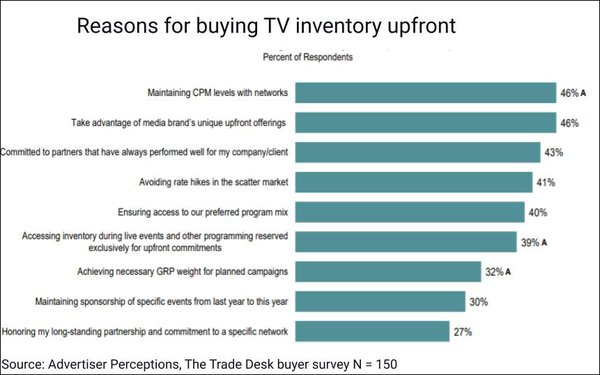 “As advertisers think about their upfront commitments this year, they’ve realized that streaming is integral to their commitments with major networks,” adds Ashutosh Gangwar, general manager, TV partnerships, at The Trade Desk.

“The reasons are clear. Some consumers have cut the cord and are not watching on linear. Streaming is the only way to reach these younger, desirable demos in a premium video environment. Streaming services have also provided advertisers a way to speak one-on-one with the consumer on the largest screen in the room.

In addition, “many advertisers find that their budgets can be more effectively used and tied to real business results when buying CTV,” he says. “Further, premium content such as live sports is increasingly becoming available on streaming networks.”

On the flip side, the most-cited reason for investing less in upfront linear TV buys is the desire for flexibility (cited by 48% of those planning decreases), followed by the ability to get access to the same premium content outside of the upfronts (38%), a preference for investing in real-time bidding (33%), a preference for the scatter markets (23%) and high costs (23%).

For both CTV and linear, nearly three quarters of buyers agree that evaluating audience overlap across publishers is important in determining upfront commitments, and 69% say they’re concerned about lack of transparency. 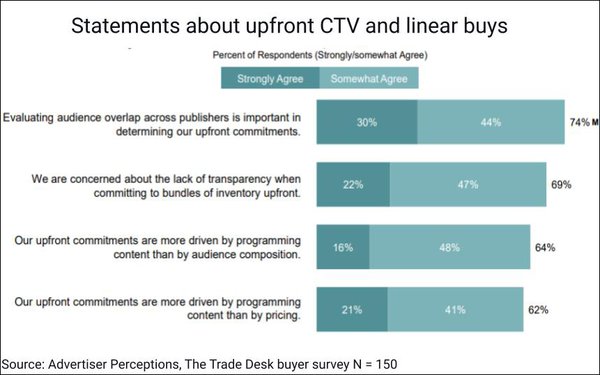 As for types of deals planned for the upfronts — across both CTV and linear — buyers are hedging their bets across a variety of methods: 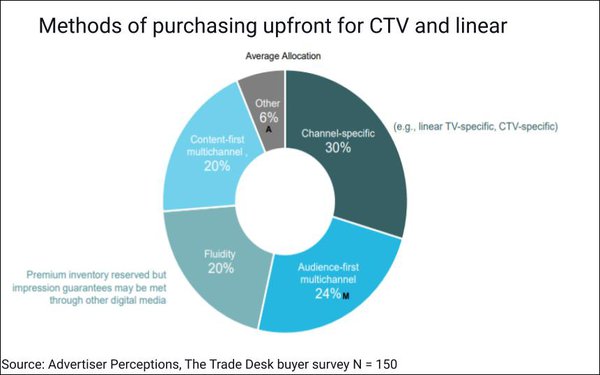 Upfront budgets as a whole are being split about 70/30 in favor of programmatic, with most programmatic spend going through some type of auction. 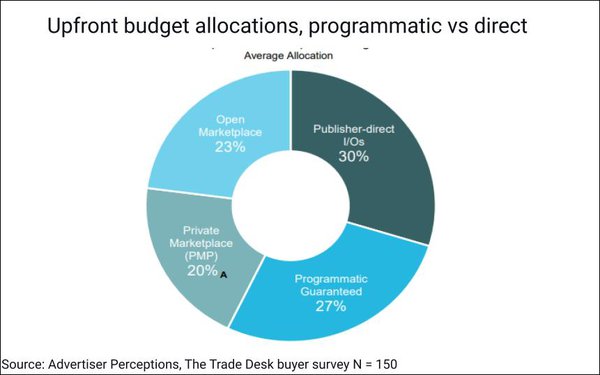 Regarding KPIs used for upfront buys, ROI/ROAS is most relied-upon, followed by brand lift and reach/frequency. 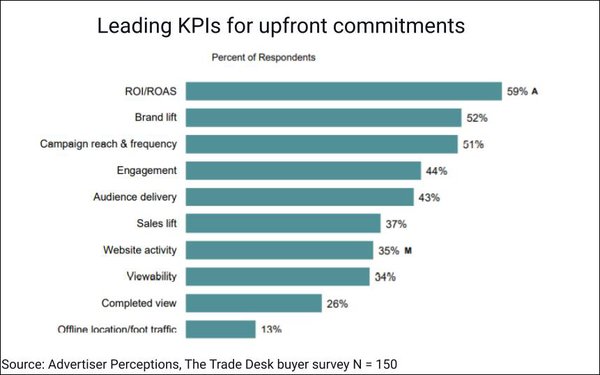