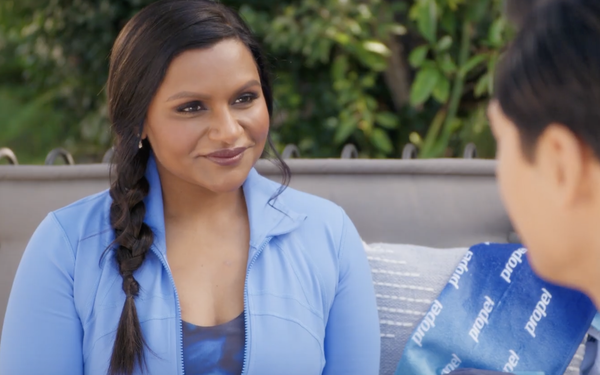 Propel Fitness Water is doubling down on its partnership with actress Mindy Kaling to spread the word about JOWO: the joy of working out.

Kicking off Saturday on National Fitness Day, the JOWO campaign includes free, month-long outdoor fitness classes in four states led by local trainers to whom Propel has granted $25,000 each.

The PepsiCo Inc. brand—infused with electrolytes native to Gatorade beverages—is targeting “exercisers on the go” with solutions for body and mind, according to Anuj Bhasin, vice president of Gatorade protein and fitness brands.

“We know there’s a lot of studies that have shown a consistent, positive relationship between physical activity and happiness,” Bhasin tells Marketing Daily. “And when consumers are able to work out together, they get a rush. There’s a great feeling—a joy that they get as well.”

As previously reported, Propel teamed up with Kaling a year ago this month after debuting an immune-support variation containing vitamin C and zinc.

“Mindy is an awesome ambassador for us. She has her own very clear fitness story and she herself embodies the joy of working out,” Bhasin says.

“We pivoted a little this year to make her even more of a heavy influencer spokesperson to lead the joy of working out.”

In this spot from PepsiCo’s in-house Creators League Studio, Kaling explains the JOWO concept while surprising the four local trainers to whom Propel has issued grants.

Propel hopes to engage with more than 100,000 people during fitness tours scheduled for Baltimore, Detroit, Houston and Los Angeles.

Beginning today, people who share “what they do to feel JOWO” on TikTok using #ShowYourJOWO #Contest are eligible to win one of 10 $10,000 cash prizes.

In addition to digital platforms, the fitness tour is being supported by a national TV campaign and local out-of-home ad placements.