Google Still Serves More Than Half Of UK Shopping Ads 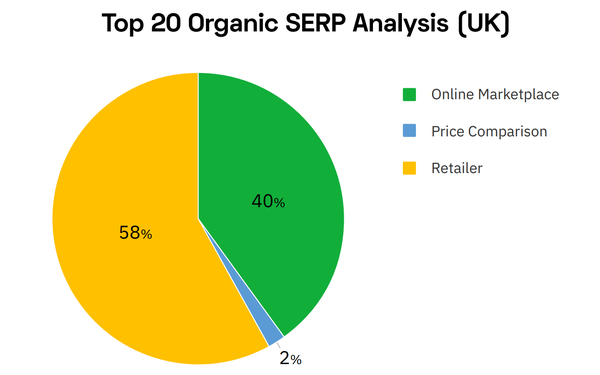 The European Union (EU) fined Google about $2.65 billion (2.4 billion Euros) five years ago, and ordered it to open up its Google Shopping service in Europe to external competition.

A new study from Searchmetrics suggests around 53% of ads on the platform in the UK still originate from the search giant.

Searchmetrics reviewed more than one million Google Shopping ad units across the UK and Germany to analyze the extent to which Google complies with the EU’s call to introduce greater competition. But the data suggests that after Brexit, Google no longer tried to increase competition on its shopping platform in the UK.

The research also suggests that most of the external participants on Google Shopping are not providers of genuine comparison-shopping services that Google’s action was intended to benefit.

Many are marketing agencies that have emerged after Google’s fine. They sell ads on the platform’s auction system, paying Google a margin and giving the impression of increasing competition, according to Searchmetrics.

Google’s Shopping platform displays product ads in search results related to specific searches. In the 2017 antitrust action, the EU ruled that Google gave itself an unfair advantage by promoting its own ads on the platform above those from rival comparison-shopping websites. The tool helps consumers compare different products and prices to make informed purchasing decisions.

By comparing the results to its previous studies, the data concludes that Google had, to some extent, initially attempted to increase external participation in the UK, but since Brexit its efforts had declined.

Of the 47% of Shopping ads in the UK that were not placed directly through Google, only 19% come from rival price-comparison websites that were the intended beneficiaries of the EU’s action. The remaining 28% were mainly from performance-marketing agencies that sell ads on the Shopping platform’s auction system giving Google a margin, the report states.

The data suggests Google’s share of UK shopping ads hovered around 68% in 2018, declining to 51% by 2019, Lillian Haase, CMO of Searchmetrics, wrote in the report.

She wrote that Google’s share of ads in the UK began to rise after Brexit -- reaching 53% in 2022 to date. There are signs of even less real competition now on Google Shopping, compared with prior.

Amazon and eBay dominate the search results, with the remainder comprising major retailers.

Price-comparison sites seem to be less present, but still play a major role. Outside of online marketplaces and retailers, only techradar.com features in the top 20, which Searchmetrics suggests offers some quality testing as well as providing offers for different retailers.

Google’s solution to addressing the lack of competition has been to open participation to Comparison Shopping Services (CSS) that can take part in the online auction by bidding against Google for advertising positions on the shopping platform.

These external providers can accept bids for ads from online merchants who want to appear in Google Shopping.

While some CSS providers are genuine comparison websites, most are performance-marketing agencies that offer comparison shopping services in name only. Many were formed after the Google was fined in 2017.

And while they may run comparison-shopping portals, they only list the products sold by merchants whose bids they manage on the Google Shopping auction system -- which means they are otherwise largely not relevant for genuine comparison shopping. In reality, their only function is for Google to demonstrate that Shopping ads are shown from publishers other than itself.

The top UK 20 Comparison Shopping Services (CSS) partners have negligible organic search traffic, according to the report, supporting the view that the primary function is to sell ads on Google Shopping, and not to help consumers find products.

Google seems to be continuing to work toward reducing its own participation in Germany, but the same issues exist as in the UK.

The external ads come from CSS partners, with 41.5% placed through agencies, and 24.9% from price comparison websites that also function as CSS partners.