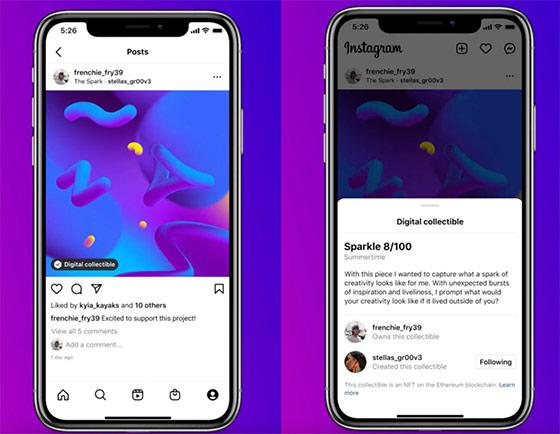 Today, head of Instagram Adam Mosseri announced that the Meta-owned platform will begin testing non-fungible tokens (NFTs) this week with a handful of U.S. creators and collectors.

Unlike Twitter, which began charging users to display NFTs in their profiles back in January, Mosseri’s tweet made clear that no fees will be associated with sharing or posting digital collectibles on Instagram.

Meta CEO Mark Zuckerberg first mentioned this news on Monday in an interview with Web 3 entrepreneur and podcaster Tom Bilyeu. “We're starting building for NFTs not just in our metaverse and Reality Labs work, but also across our family of apps,” Zuckerberg said. “We're going to bring similar functionality to Facebook soon.”

Zuckerberg said he believes that NFTs will play a key utility role in the metaverse, such as digital clothing and accessories for everyday users, also stating that the ability to transfer these items between platforms will be essential.

Instagram will initially support Ethereum-based NFTs, along with future integrations for Polygon, Solana, and Flow. To prove NFT ownership and display them on their Instagram profiles, users will utilize compatible third-party crypto wallets such as MetaMask, Rainbow, and TrustWallet, according to Coindesk.

As of now, only a limited number of people will have access to the initial test with the ability to share NFTs in their main Instagram Feed, Stories, or in messages. But Mosseri said that once the company receives feedback from testing it will roll out more NFT functionality to a wider user base.

Mosseri said the company is concerned about blockchain technologies’ complex relationship to the distribution of trust and power.