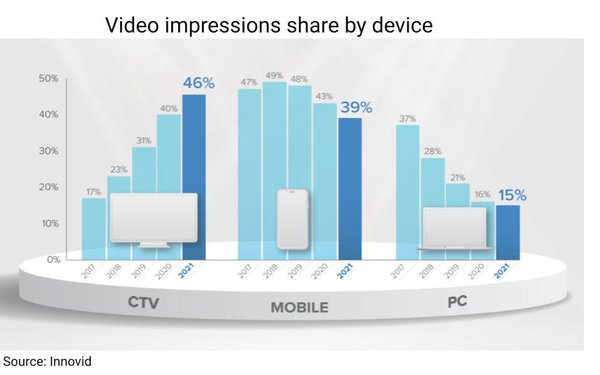 In 2021, connected TV (CTV) surpassed mobile as the channel with the greatest share of global video impressions, according to Innovid's latest annual Global Benchmarks Report.

"As more consumers have transitioned to streaming, advertisers are shifting spend to the channel, and we expect that trend to continue with mobile and desktop losing more market share,” said Jessica Hogue, GM, measurement and industries at Innovid.

While global video saw year-over-year increases across all devices, CTV grew at more than two times the rate of mobile and desktop. 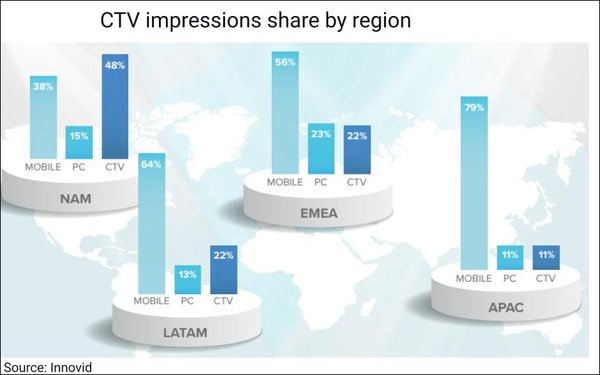 Broadcast media accounted for 54% of CTV impressions (down from 61% in 2021), while programmatic’s share of impressions rose by 4 percentage points, to 30%. 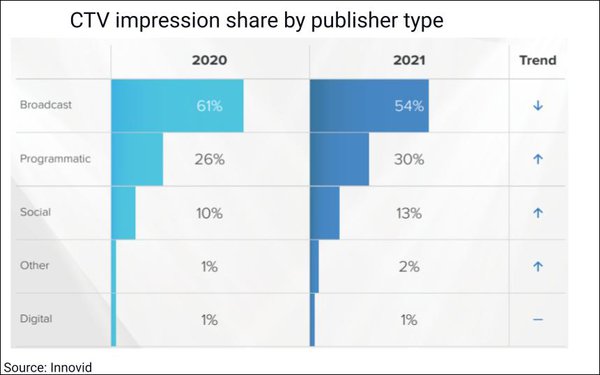 There was a 32% year-over-year increase in advertisers running dynamic creative campaigns, which generated stronger engagement compared to those that ran standard pre-roll creative, according to the report.

Across the board, advertisers tapping into advanced creative earned an additional 47 seconds of time in 2021, up from 34 seconds last year. Interactive CTV led the charge, generating an incremental 72 seconds of time earned between brands and consumers. 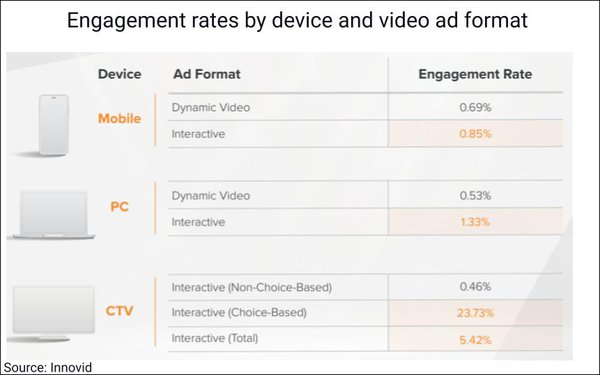 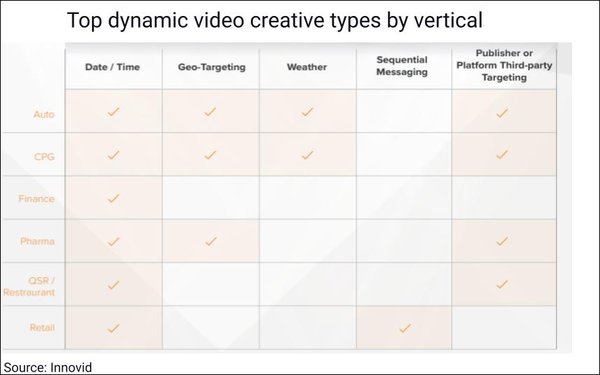 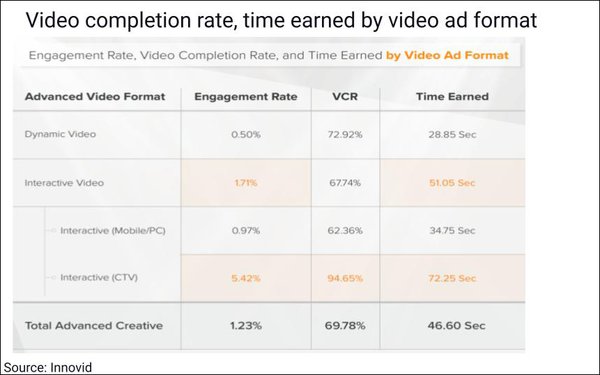 QR code units also continued to grow in popularity, driving a 0.02% scan click rate and high intent and follow-through from the audience.

The report underscores that CTV still has ample room to grow.

While many advertisers are still testing and learning about CTV, "for others, this represents an opportunity to increase reach," notes Innovid. 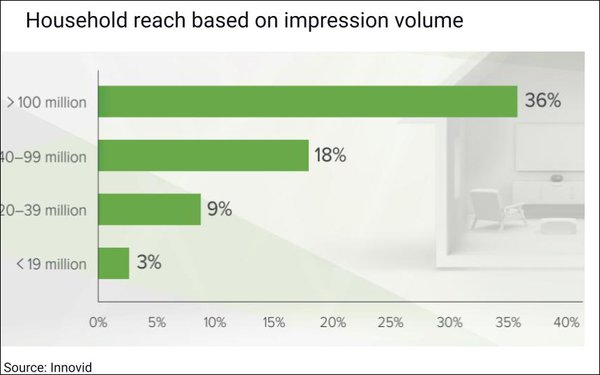 And while marketers in verticals with higher household reach are pushing the envelope on penetration, even they have room to expand. 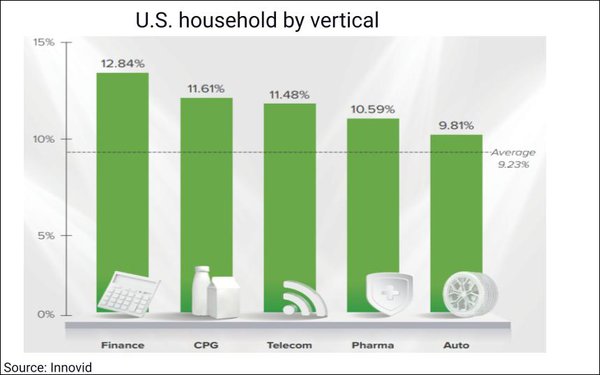 The study showed a low level of ad frequency -- 4.08 exposures on average -- indicating considerable leeway for advertisers to reach new households without risking oversaturation. On average, just 8% of campaigns had a high frequency (over 10 exposures), while two-thirds had low frequencies (one to two exposures, a a quarter had medium frequencies (three to nine exposures). 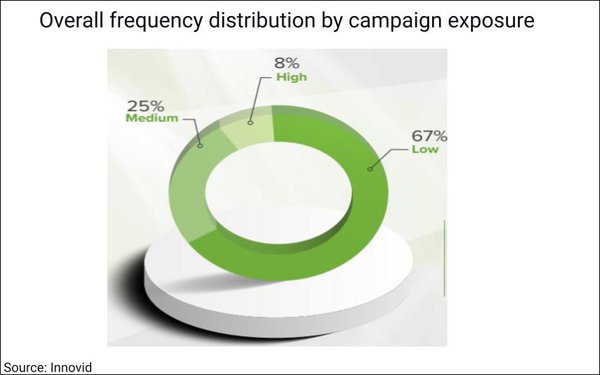 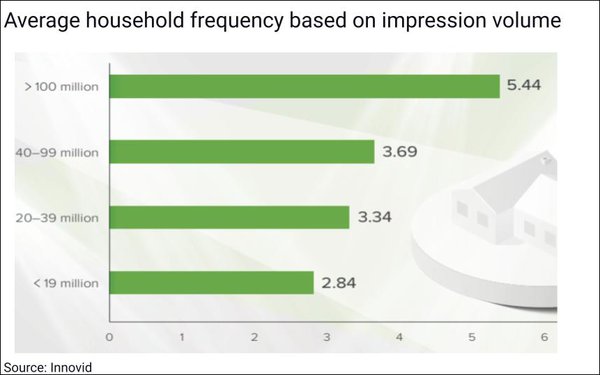 Roughly 85% of CTV impressions delivered in 2021 were across just 10 platforms, and more than two-thirds were generated by the top three.

Large-platform consolidation has grown even as new streaming services have driven more fragmentation.

With consumers in the U.S. watching content on average across four streaming VOD services, each with similar content offerings, "it's no surprise that increasing the number of platforms in a campaign leads to a higher level of audience overlap, points out Innovid. 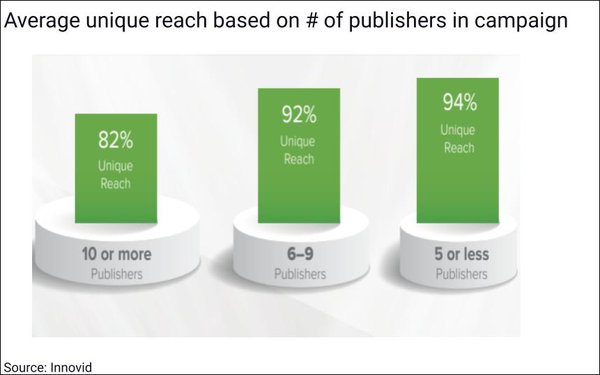