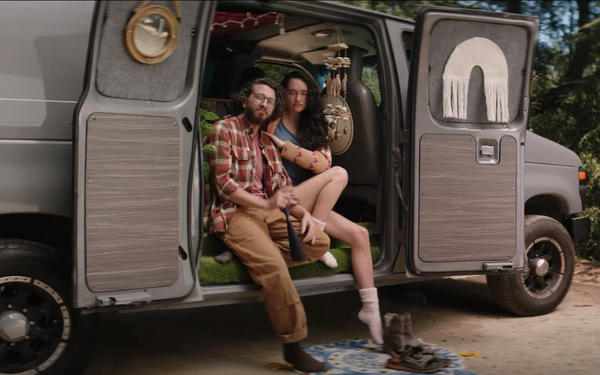 Stellantis is launching a campaign for its Pacifica minivan models that takes a jab at the #VanLife influencer lifestyle.

The multimedia campaign from Doner shows how the Pacifica is the more ideal choice for parents living their best “real life” as opposed to the self-congratulatory influencer nomads.

This is the first campaign for Pacifica in four years that doesn’t feature Kathryn Hahn.

The automaker last featured the comedic actress as a game show host extolling the features of the Chrysler Pacifica Hybrid to bewildered contestants in a campaign that broke in December 2020.

The automaker first used her in March 2018, and has reprised her role as a stressed-out, goofy mom several times. Another campaign, featuring the real-life mother of two playing a mom in quarantine, broke in June 2020.

Like those efforts, this campaign also uses humor while putting a spotlight on the features and versatility of the Pacifica minivan from a family perspective, says Olivier Francois, global CMO, Stellantis.

"We saw an opportunity to have some fun with the #VanLife influencer phenomenon that seems to be taking over social media these days, which shows how these influencers both live and travel in their vans,” Francois tells Marketing Daily. “The van life of everyday families is very different than what many might see in those pictures and video across social media when searching the #VanLife hashtag.”