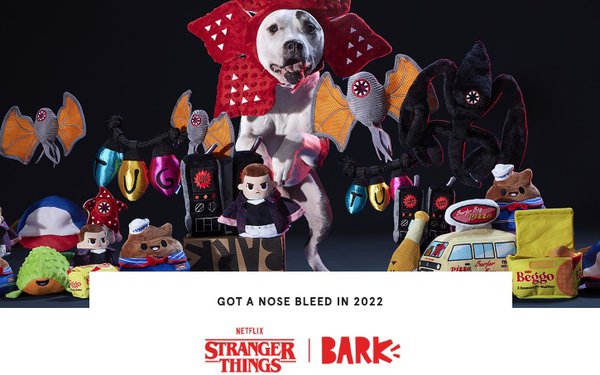 As Netflix gears up for an advertising-supported subscription tier, snack, cosmetic, and dog-focused brands are rallying behind this week’s return of the streaming network’s hit series “Stranger Things.”

Doritos is plunging into the mysterious Upside Down world depicted in the first three seasons of “Stranger Things” with a virtual concert next month titled “Live From The Upside Down.”

Scheduled for June 23, the Doritos concert will be a mashup of musical talents designed to appeal to a broad swath of demographics.

According to the Doritos narrative, a tour bus crashed while enroute to Doritos Music Fest ’86 and the musicians inside “disappeared into another dimension.”

The concert can be viewed on the Doritos YouTube channel.

While supplies last, MAC purchases of at least $65 will include a free belt bag bearing the likeness of the tiger mascot of the fictitious Hawkins High School from “Stranger Things.”

New subscribers to a BarkBox six- or 12-month subscription plan will receive a box containing “Stranger Things” dog treats and a variety of toys named after characters and creatures in the series.

One example is Beggo Woofles—soft and squeaky toys named for the Eggo waffles preferred by central “Stranger Things” cast member Eleven, who is portrayed by British actress Millie Bobby Brown.