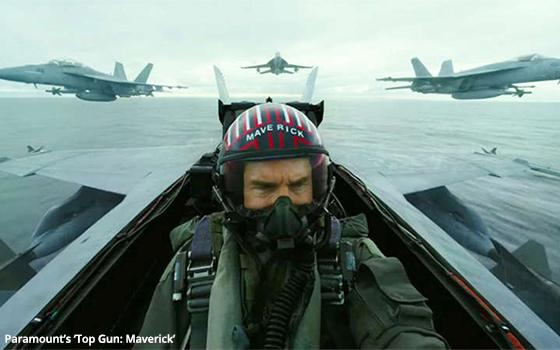 “Top Gun: Maverick” broke another record in its second week -- dipping just 32% in its U.S. box-office results (to $86 million) from its debut week.

“The domestic hold of 32% is the lowest percent change for any movie that has opened to $100 million or more,” says Paul Dergarabedian, senior media analyst for Comscore. “After just 10 days in release, the cume as it stands now is in Paramount’s top ten of all time.”

Second place went to Walt Disney’s "Doctor Strange in the Multiverse of Madness" -- with $9.3 million in U.S. theaters. Third place was for 20th Century Studios' "Bob’s Burgers Movie" -- at $4.5 million.

Looking ahead, movies that are expected to have a big debut include Universal Pictures' "Jurassic World: Dominion" (opening June 10) and Disney-Pixar’s "Lightyear" (June 17), and Warner Bros.' "Elvis" (June 24)

From May 8 through June 5, for the most recent two-week period, "Jurassic World” has spent an estimated $11 million and $7.6 million in national TV ad spending, according to iSpot.tv -- tops among all active theatrical movie marketing. It has pulled in 875.9 million impressions over the last thirty days.