Automotive TV Spending Up Nearly 38% In May 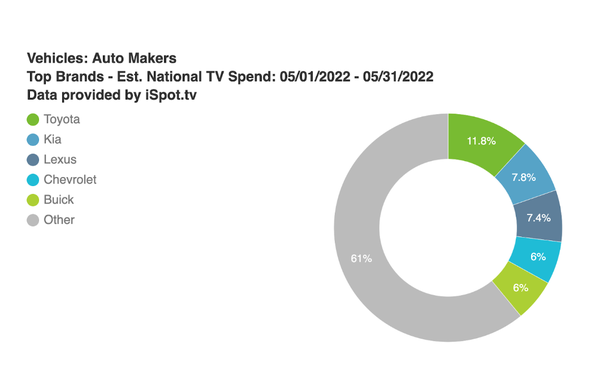 Automakers spent 37.6% more on their national TV advertising spend in May compared to the same month a year ago, per iSpot.tv.

Over half (51.07%) of Toyota’s national TV ad spend in May was allocated to NBA games as the playoff field continued to narrow, per iSpot.tv.

Kia was similarly basketball-focused, with over 47% of national TV ad spend put toward the NBA, and another 5.8% during TNT’s "Inside the NBA." During the month, four of the top 20 NBA advertisers were automakers, with Toyota and Kia joined by Nissan and Honda.

Automakers have a huge opportunity to get messaging in front of large audiences during events like the NBA and NHL playoffs, says Stuart Schwartzapfel, senior vice president, media partnerships at iSpot.

"Some have been using those buys to introduce 2023 models in their vehicle lines,” Schwartzapfel tells Marketing Daily. “As summer begins, it’ll be interesting to see how much of auto brands’ national TV advertising remains focused on moving 2022 inventory, versus emphasizing those vehicles with more local ads instead.”

With the NBA Playoffs back to its normal place on the calendar, league advertisers like Toyota are showing large year-over-year increases in spend for May since the comparison is mostly against the end of the 2020-21 regular season, per iSpot.tv.

Meanwhile, Infiniti’s climb is fueled by a much larger investment in the PGA Championship as well as various Fox News shows when compared to last year (just $17K, put toward cable programming).

After minimal May spend was put toward NBA and NHL games last year, over 46% of Buick’s spend this May was seen there. Additionally, just 10.6% of Buick TV ad impressions were local this May, versus 45.3% in May 2021, per iSpot.tv.

Sports-related programming is once again a huge source of impressions for automakers, and increases considerably year-over-year. In May 2022, 27.3% of TV ad impressions were delivered by sports programs, versus 20.1% in May 2021.

At the same time, auto brands actually saw a smaller share of impressions during reality TV shows (11.4% vs. 13.0%), while movies climbed slightly from 8.2% to 8.7% of auto impressions.