Why Purpose-Driven Ads Are Underperforming Mainstream Ones 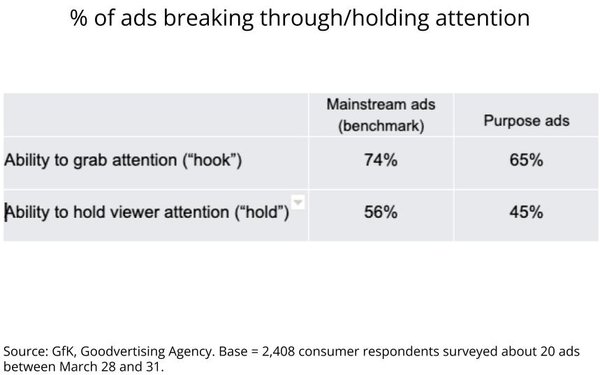 Like most forms of marketing, the meaning of "performance" often is in the eye of the beholder. And increasingly, that's about what the beholder's eyes are actually doing. You know, paying attention. Or not.

Consumer attention has always been an attribute of the ad industry, even if other words -- remember "engagement" -- were used as proxies for defining it. But over the past few years, ad pros have become much more explicit about it, and not surprisingly, a gold rush of "attention metrics" suppliers have been racing to fulfill it.

In recent weeks I've written about some high-profile moves in the attention-measurement marketplace -- Havas striking a global deal for a "bespoke" version with Lumen Research, and "attention capital" guru Joe Marchese being named chairman of Adelaide -- and it feels to me like attention about attention is beginning to peak.

So when the folks at research giant Gfk shared some new research about the relative attention generated by different forms of "purpose-driven" ads, I figured it would be something that would pique your interest, too.

Overall, the study found that when it comes to captivating and holding consumer attention, purpose-driven advertising so far has been, well, kind of meh.

That's despite the fact that they often represent important purposes  -- everything from sustainability to social justice and other arguably vital issues.

"With millions of dollars being spent to define and promote the 'purposes' of brands, what are the real outcomes," asked the GfK study, conducted in association with the Goodvertising Agency. The answer: They generally underperform "mainstream ads" with it comes to grabbing and holding consumer attention.

In other words, purpose-driven ads aren't exactly driving attention, and ostensibly, the performance related to people actually engaging with and being influenced by them. And isn't that the real purpose of any form of advertising?