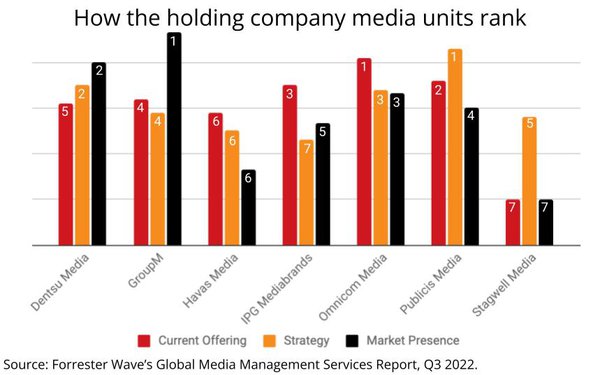 Omnicom Media Group has the strongest overall "current offering," but Publicis Media Group leads on "strategy" and GroupM in terms of "market presence," according to findings of a just-released "Forrester Wave" analysis published by Forrester Research.

The analysis, which is based on Forrester's proprietary methodology, combines primary research and company data supplied through March 25, 2022. The analysis assesses 19 separate criteria.

"As the only agency group to have earned the highest possible score in all three of the criteria that we believe best represent the future of media investment and management - retail media, commerce media, and intelligence & insights - and as a group that also received the highest possible scores in two criteria that we think are critical differentiators in selecting an agency partner – operations and innovation road map – OMG is clearly a leader in today's marketplace," OMG CEO Florian Adamski said in a statement included with a release of the report. "More importantly, as we continue to expand our capabilities and automate our infrastructure, and to build new products and partnerships, we are assuring that we and our clients will remain leaders --  today, tomorrow and beyond."

Stagwell Media Group had the weakest overall performance in the Forrester Wave analysis, ranking last in both "current offering," as well as "market presence," though it ranked fifth in terms of "strategy."

IPG Mediabrands ranked last in strategy, fifth in market presence and third in terms of its current offering.