The Expansion Is Over: Ad Economy Recedes For First Time In 16 Months 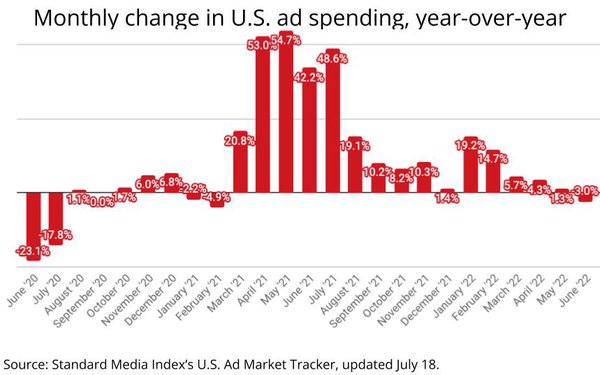 The U.S. ad market contracted 3% in June, marking the first decline since February 2021, according to a MediaPost analysis of data from Standard Media Index's U.S. Ad Market Tracker.

The contraction follows a steady deceleration of the U.S. ad market's expansion coming out of the COVID-19-related advertising recession.

Most of the June 2022 contraction was due to reductions by the nation’s largest advertising categories. Spending by the top 10 categories fell 5.2% in June, while all other categories actually expanded 1.2%.

Most of June’s erosion occurred among traditional media spending.

Among media, the erosion was mostly among traditional media, which contracted 16.6% from June 2021, while digital expanded 8.6%.

Digital’s share of all media spending rose to six points to 62% in June.