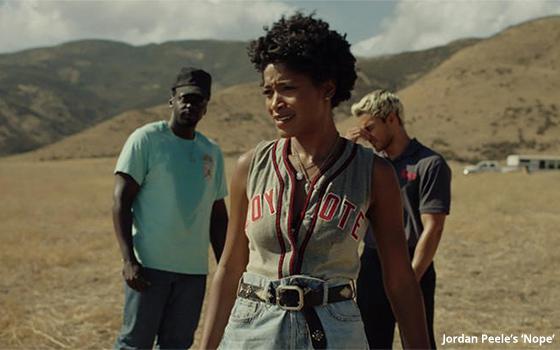 Jordan Peele’s third in a series of science fiction/thriller movies -- "Nope," from Universal Pictures -- took in $44 million, according to Comscore, during the recent weekend period.

Although slightly under the $50 million that movie-studio analysts were expecting -- landing right between Peele’s two previous films: 2017’s "Get Out," with a $33 million opening weekend box-office revenue; and 2019’s "Us," at $71 million -- "Nope" scored the highest opening weekend tally for an original screenplay in three years -- since Peele’s "Us" debuted.

These types of social thriller/horror films have performed much better than the average in its genre, according to film research executives.

The success of Peele’s movies comes amidst high-flying superhero/fantasy/action-adventure films that have dominated U.S. theater ranks in recent years.

Fourth and fifth place went to Sony Pictures’ "Where the Crawdads Sing" (in its second week) -- taking in $10.3 million, and Paramount Pictures' "Top Gun: Maverick" (in its ninth week) grabbed $10 million.

"Maverick" now has earned $635.6 million in domestic (U.S./Canadian)) box-office revenue, and $1.3 billion globally, according to Comscore. This tops all theatrical movies this year.

This tracks roughly to total movie studio national TV advertising spending down 21% to an estimated $606.3 million, resulting in 46.3 billion impressions (January 1 through July 23), according to iSpot.tv.