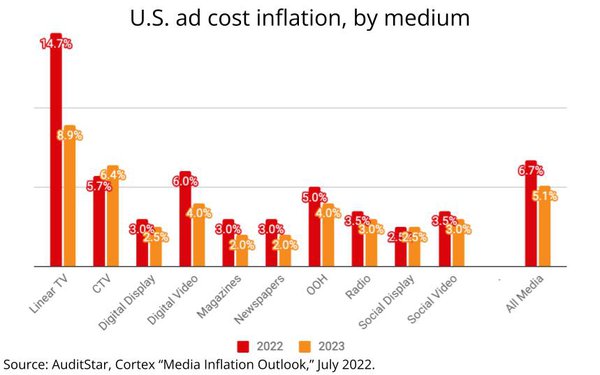 Despite U.S. consumer price inflation nearing double-digit rates, advertising cost inflation across media is expected to rise only 6.7% this year, and is projected to moderate to 5.1% next year, according to just-released estimates from auditors AuditStar and Cortex Media.

The data, part of their "Media Inflation Outlook" report, is derived from a variety of industry sources, including the World Federation of Advertisers, the Interactive Advertising Bureau, IPG Mediabrands' Magna, WPP's GroupM and Publicis' Zenith units, as well as economic forecasts from the International Monetary Fund and the Organization for Economic Cooperation and Development.

Additional data was derived directly from advertisers and agencies the auditors work with.

The report includes ad cost inflation estimates for a variety of market, but not globally.

In the U.S., the only medium projected to inflate at a higher rate in 2023 is CTV (connected TV), which has been accelerating due to acute demand for what is perceived as a finite supply of inventory.

That said, conventional linear TV will continue to see the fastest-rising advertising costs of any major medium, albeit at a more moderate rate in 2023 (8.9%) than this year (14.7%).

Linear TV ad-price inflation for next year was also reaffirmed by the release of Media Dynamics' estimates for the 2022-23 prime-time CPM costs for broadcast and cable TV networks, which are projected to rise 9.6% and 6.6%, respectively vs. the 2021-22 upfront CPMs.

While their analyses were likely were conducted differently, Cortex's just-released estimates for U.S. ad cost inflation in 2022 is 1.3 percentage points higher than what ECI Media Management released earlier this year. At that time, ECI projected U.S. ad inflation would rise 5.4% this year, while worldwide ad inflation were projected to rise 4.5%.