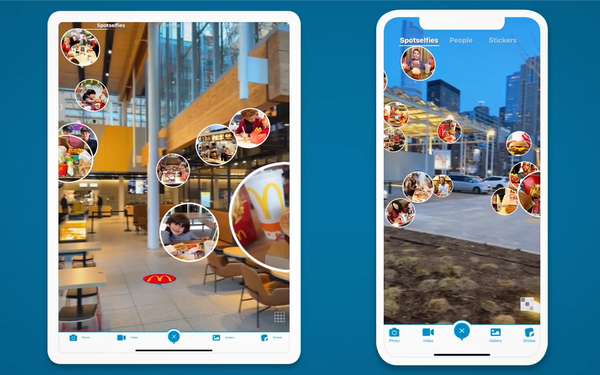 One major goal of developers and companies championing the metaverse is an advanced augmented or mixed reality (AR or MR), in which virtual experiences are superimposed directly into the physical world. Examples of this include Snapchat's AR filters or the unsteady evolution of AR glasses.

As more money is invested in AR, and as the public continues to adopt what the technology has to offer, brands are likely to become increasingly interested in capturing the attention of consumers.

Spotselfie -- a budding AR-powered social metaverse that invites users to post virtual objects, pictures, and videos geotagged to physical locations -- has announced a new feature that allows companies to place GPS-located AR ads in real-time at any live event around the world.

The SAM Business Portal (Socialize, Advertise, Monetize) invites customers to identify as a small business or a large corporation, select an area via GPS location, then customize their advertisement to be viewed through the app's augmented-reality lens.

By accessing the metaverse through the Spotselfie smartphone app, users will be able to see AR ad placements relevant to their immediate surroundings and the preferences saved on the Spotselfie's patented personal profile mechanism, urMojo.

This idea is not exactly new. Snapchat, which has a muchlarger user-base than Spotselfie, introduced location-based advertisements in March. However, Spotselfie's pursuit of a full-fledged metaverse experience sets it apart.

While the app was originally designed for college students, and didn't include advertisements, it is now using the SAM Portal to target a wider audience and develop its overall vision as a complete metaverse.

The SAM Business Portal is tied directly to Spotselfie’s digital land technology, called Spotland, on which users can claim parcels of land tied to a real-world location. Digital land owners then make 30% of the revenue tied to whichever AR ad is dropped on their parcel.

Spotland also welcomes businesses to create a “digital twin” of its physical location, offering a chance to immerse their brand, marketing, and customers into a new type of digital world by controlling the name, digital GPS locations, social content, and advertising.

According to its website, users are that business owners, landowners, corporate advertisers, marketing or advertising agencies, non-profits, or government entities can register as a “Staking Entity,” which gives one priority regarding the claiming of digital land.

Spotselfie co-founder and vice president of product development Ray Shingler said in a statement that the company wants to help struggling small businesses compete against large corporations by offering them a customized advertising model, and “leveling the advertising playing field with our patented innovative AR technology.”

“Small business can now place AR ads at any live event where our users are, including concerts, sports events, entire city blocks, and anywhere around the world,” Shingler added.

The SAM Portal is now live on the Spotselfie website.