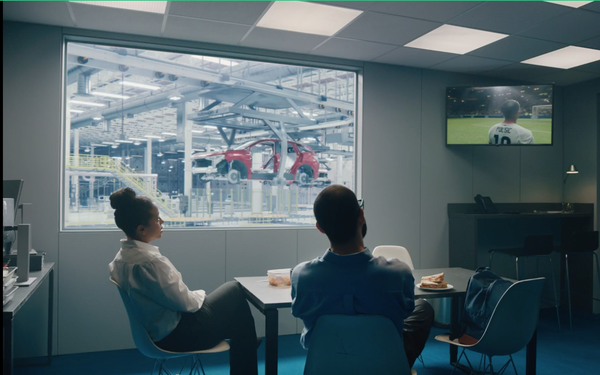 The 60-second spot is both a nod to the automaker’s three-year partnership with U.S. Soccer and the start of U.S. production for the ID.4 electric SUV in Chattanooga, Tennessee.

The spot, from agency of record Johannes Leonardo, features a journey through Pulisic’s life, from when he was just starting out as a youth player to his current status as a star player. The pressures of being a top player are shown along the way, including a brief visit by the player to a therapist’s couch.

The spot also shows two Volkswagen workers watching the soccer player on the break room TV, while a glass window in the background shows vehicles being produced on the production line. “So much pressure,” says one employee to the other, who answers: “Pressure makes diamonds.”

The spot is meant to show the positive side of working through pressure and remove the cynicism some might have about moving toward an electric future, according to the automaker.

“Diamonds” will premiere on broadcast during the English Premier League on Saturday. Additionally, the work will run during the 2022 Emmys Awards on Sept. 12, “The Tonight Show,” “Late Night with Seth Meyers” and “20/20.”

Volkswagen lost one of its top marketing executives on July 6 when it was announced that Kimberley Gardiner, senior vice president, VW marketing, was leaving the company.

The automaker’s marketing team is currently reporting to Gardiner’s boss, Andrew Savvas, who is head of U.S. sales and marketing, until her replacement is hired.