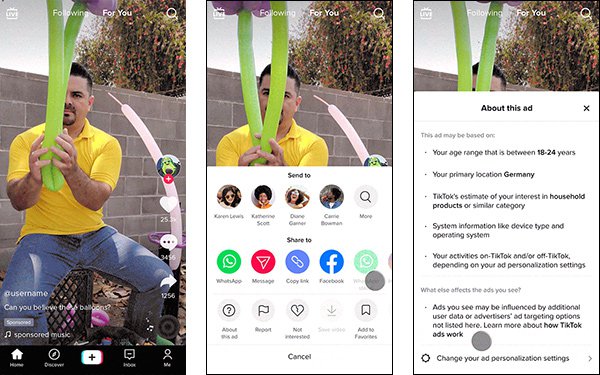 As part of a pledge of transparency around collecting, using, and sharing data for advertising, TikTok is launching new ad-targeting tools intended to provide users with information about the ads they see on the fast-growing social media app.

TikTok’s new “About this ad” feature allows users to tap on any ad in their feed and view the reasons why TikTok has decided to show the ad to them.

Users can go to the “share” menu in the lower right corner of an ad to access this personalized ad targeting information, which may depend on a user’s age, gender, location, and/or a specific range of relevant interests such as pets or skateboarding.

From there, users can access their Ad Personalization settings and make changes to their preferences, including being able to switch off ad personalization based on third-party data.

Users can also choose to turn off an interest category, such as “Beauty,” to receive fewer ads targeting their matched interest, or change their gender setting.

Other apps offer similar targeting options for users, giving them some semblance of control over what ads they are shown.

“These updates can be changed at any time in the app and apply only to users’ ad settings, which does not affect other TikTok services,” the company said.

In other words, regardless of whether users opt out or change settings, TikTok can still collect users' in-app activity in its ad targeting process.

“About this ad” has launched globally, though TikTok says they plan to add more features in the coming months, like “disclosing the advertiser behind a certain ad and giving users more options to control their ad experience.”

It should be stated, however, that TikTok has also made recent attempts to evade restrictions on ad-targeting in certain regions through what Social Media Today called “questionable means.”

In July, TikTok was forced to pause a controversial privacy policy update in Europe, which would have allowed the platform to stop asking users for their consent to be tracked in receiving targeted advertising, reported TechCrunch.

The update is still on pause as European authorities wait to review the case.