In Walkup To 30th Anniversary, Lagunitas Unleashes Dog Image Across Its Portfolio 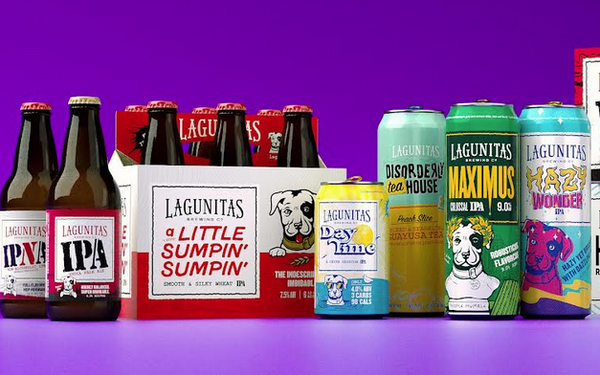 The dog that has graced some of Lagunitas Brewing Co.’s bottles and cans for the past 29 years has become a fixture across the company’s entire portfolio under a global packaging redesign.

Driven by surveys of some 10,000 respondents showing how much the pooch resonates with consumers, the redesign is the first step in bringing him front and center in Lagunitas’ marketing efforts, according to CMO Paige Guzman.

“We showed them the old packaging and asked whether it conveys high quality across attributes of how consumers choose beer, and then showed other versions and asked if it denotes higher or lower quality,” Guzman tells Marketing Daily.

“Consistently, the packaging we selected denoted significantly higher quality than our existing packaging and versus our competitors.”

The dog will take on different appearances depending on the product. On Lagunitas’ Day Time IPA, he’s seen half submerged in water and wearing sunglasses, while on the high-alcohol Maximus Colossal IP,  he evokes a Roman emperor.

“Step one is bring it forward in packaging,” adds Guzman.

“Step two will be launching a new integrated campaign in Q1 of next year—and you’ll see the packaging prominently featured in that advertising.”

“He always said he didn’t have money for marketing, but he had beer. So in Petaluma, where we’re founded, he started giving beer away to nonprofits—many of them animal-related—so they could raise money,” says Guzman.

Lagunitas has a new partnership with the nonprofit Best Friends Animal Society, which was consulted on and approved the redesign.

Asked about the dog’s breed, Lagunitas BrewMonster Jeremy Marshall says, “He’s a mutt—kinda like the mix of people that make up Lagunitas.

“We like to say the Lagunitas dog represents a piece of all of us, and it is a way of showcasing that there is a seat at our bar for everyone.”

Lagunitas is the #1 IPA brand in the United States, according to Guzman. “We’re the OG of IPA, and we’re very proud of that.”