Pandora's Next Move: Bling For Your Pooch 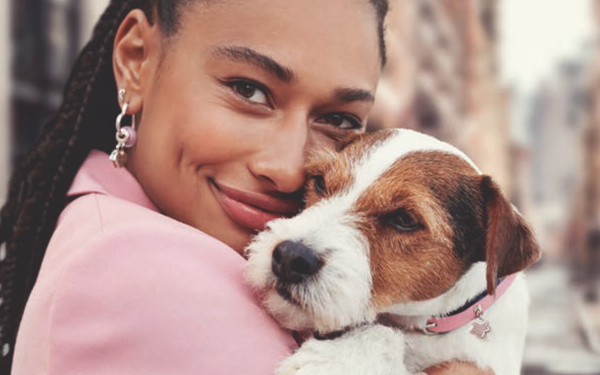 Pandora has already laid claim to birthdays, anniversaries, hobbies and obsessions. Naturally, the jewelry giant’s next step is into the wardrobes of the world’s fur babies.

The Danish company is rolling out a new line of pet collars and engravable tags, which fans can match to their own Pandora jewelry collections.

A spokesperson for the retailer tells Marketing Daily that advertising for the new collection will run on its owned social and email channels, with a more targeted strategy to inform loyal Pandora customers about the latest additions.

While Pandora is known for its conscientious sourcing of gems, metals and other materials, it says its first-ever pet collection required some new design thinking. The collars are made from plants, not leather. And the tags -- shaped like bones, hearts and paws -- are lightweight steel, so even the littlest kittens won’t feel weighed down.

“Designing for pets brought new considerations to our process, so we’ve worked with a unique set of materials to create products that cater to them,” it says in its release.

The launch comes as Pandora continues to notch impressive gains, even as Etsy and other competitors in personalization gain ground. In its most recent earnings report, Pandora revenues rose 21% in the first quarter, with all platforms improving. Collaborations, including the successful Marvel launch in February, helped.

It’s also pushing ahead with expansion plans, including 32 new stores mainly in the U.S., primarily on the West Coast. And it’s also expanding its partnership with Macy’s. It introduced five shops within Macy’s stores last year and will expand to 28 more locations.

Pandora is also upbeat about its prospects, based on the healthy demand from core customers. Even with negative impacts from the war, cost inflation, higher interest rates and shrinking disposable income, it raised its financial forecast. It now expects organic growth to be in the 4% to 6% range, higher than the 3% to 6% initially forecast.