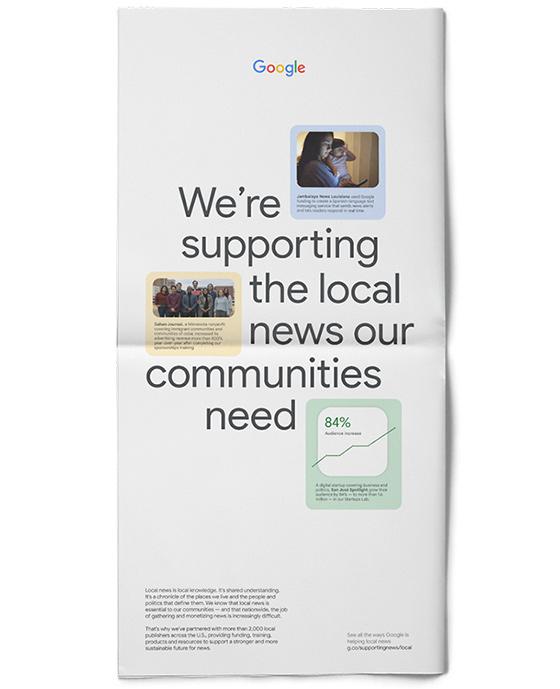 The campaign will run through October. They highlight publishers around the U.S. who've used Google New Initiative programs and tools to bring important stories to communities.

Searches lead readers to many of these publications and news outlets. Chris Krewson, executive director of LION, believes the national nonprofit association that serves local journalism entrepreneurs would not be where it is today without a partnership with the Google News Initiative. The first collaboration, Project Oasis, dates back to 2020.

“Our partnership has enabled direct training, coaching and funding for nearly 200 independent newsrooms,” Krewson said. “These efforts, coupled with broader industry research, have helped us, our members and the industry … gain a better understanding of what sustainable independent news businesses look like.”

Through programs and partnerships, Google works with more than 2,000 local news publishers across the U.S., offering free online and in-person training for publishers and journalists, a variety of tools and products, and educational resources, workshops, and intensive, cohort-based programs for publishers to learn from one another.

This is an ongoing effort for Google. In June 2022, the company announced a redesigned, customizable Google News experience for desktop to help people read more deeply into important stories and more easily find local news. Systems were improved so authoritative local news sources would appear alongside national publications, when relevant, in general news features such as Top Stories.

This also helps readers identify stories that have been frequently cited by other news organizations, giving them a way to find the most helpful or relevant information for a news story. The label appears on Top Stories. The “highly cited” label is available in English in the U.S. with plans to expand globally over the coming weeks.