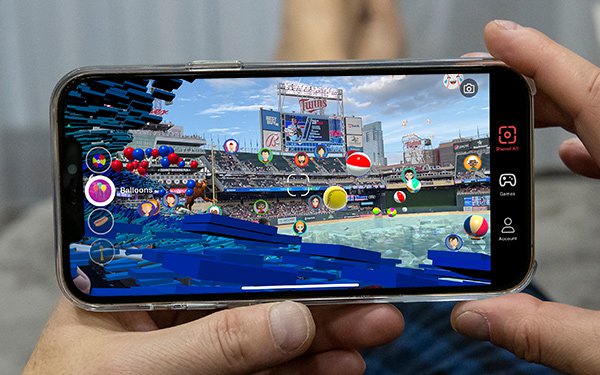 The Minnesota Twins is launching an augmented-reality platform at Target Field in Minneapolis. The AR keeps baseball audiences engaged during game downtime.

The Twins have partnered with ARound, an AR stadium platform shared product from the Stagwell Marketing Cloud.

Utilizing 3D spacial computing, fans point their smartphones at the field to open multi-user AR games, such as Batter Up, Blockbuster and Fishin’ Frenzy — all designed to be played by interfacing with the physical ballpark and fellow fans in real time, during home runs or mascot races.

Target Field can house 40,000 attendees — and the goal is for fans to enjoy a collective experience.

ARound Founder and CEO Josh Beatty, told Agency Daily: “ARound is redefining sports sponsorships and the personality brands can bring to life with creative, in-stadium, mixed reality experiences for fans. Imagine the print billboard in the outfield is no longer simply a static image but one that reacts based on the game.

“A champagne bottle that pops for every home run, a plane that takes off at the beginning of an inning or an NFT drop, based on the sportswear a player is wearing. Each are ripe territory for brand integrations,” he added. “ARound unlocks an entirely new and widely creative medium for sponsors to interact with fans in a contextually relevant manner.”

“Shared augmented reality is the next frontier that sports teams, brands and other organizations should adopt as they look for ways to engage their audiences,” said Stagwell Chairman-CEO Mark Penn.