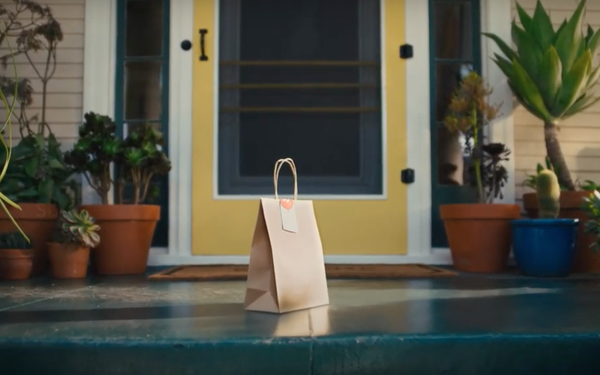 DoorDash is a brand busy building relationships with three core audiences. It's out to win over merchants and restaurants. It's wooing drivers -- aka Dashers -- who deliver the goods. And then it's courting the millions of consumers who want their ramen or candy bars without having to leave the house.

In its first new brand campaign since 2019, themed "A Neighborhood of Good in Every Order," it's finally got a message for all of them.

"We've never told the single story of DoorDash at one time or in one place," says David Bornoff, senior director, head of brand marketing at DoorDash. "So this was the culmination of years of marketing, to find a story that encapsulates why DoorDash is here."

The idea behind the campaign, he tells Marketing Daily, is the main idea of DoorDash itself, "which is to empower local communities and economies."

The breezy, light-hearted ads connect the dots between all three groups. They show how each order -- whether for a bouquet of flowers, a box of heartbreak tissues or fish food -- benefit individual merchants and Dashers.

The 15-second spots convey the ripple effect of good DoorDash injects into people's lives, livelihoods and neighborhoods. "It's about telling the story of DoorDash as a force for good," Bornoff says.

And because the campaign uses stories, "social media is a great outlet for us, too," he says.

Also different is how the company collaborated on the work. "Often, new campaigns just involve people from marketing, and everyone else gets to see it as it breaks," says Bornoff.

In this case, "we developed it in deep connection with our policy team, social impact team, and engineering -- all the people constantly thinking about how to make the Dasher experience better, the merchant experience better."

The cross-functional approach was critical, given how the pandemic has changed the world's connection to home delivery and accelerated its adoption.

"The behavior is sticky. People haven't stopped using these products now that the world has opened up."

Early on in the pandemic, marketing often focused heavily on merchants. "We wanted to do everything in our power to make sure that our merchant community was able to stay afloat," says Bornoff.

That included a Main Street Strong effort "and many behind-the-scenes initiatives to help them," says Bornoff. And it's equally important to demonstrate that every order also helps a Dasher.

"That's the crux of this campaign, to show that flywheel. Your order directly impacts the Dasher's livelihood and the merchant's ability to stay open."

He hopes that as the campaign rolls out, it changes consumer perceptions about the impact of each order. "I'd love for people to say, 'I understand that DoorDash does more than deliver food, and I'm excited that my order can help."

The 10-year-old company, based in San Francisco, just released its Economic Impact Report, which includes new data on how it helps small businesses and provides flexible work.

In 2021, it facilitated 1.39 billion consumer orders globally. Working with 500,000 merchant partners, it drove $25 billion in sales for its Marketplace merchants that year and provided economic opportunity to 6.8 million people. Additionally, Dashers contributed more than $18.7 billion to the U.S. GDP through their dashing income.