Inflation Toll: 26% Of Americans Have Cut Back On SVOD, Pay TV 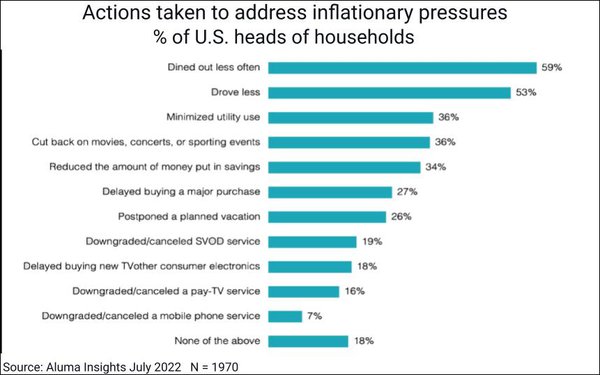 In the past six months, inflation has caused 26% of U.S. households to downgrade or cancel a subscription video-on-demand (SVOD) service and/or a pay TV service, according to a July survey of 1,970 U.S. adults by consultancy Aluma Insights.

Nineteen percent reported reducing or canceling an SVOD service, and 16% reported doing the same with a pay TV service.

(To avoid double-counting, the 9% who reported having done both were not included in the combined total — thus the 26% instead of 35%, explains Michael Geeson, Aluma’s founder and principal analyst.)

While cutbacks in many other expense categories were more prevalent, any acceleration in subscriber churn is not good news for the already hemorrhaging pay TV sector or the slowing SVOD sector.

Households making less than $30,000 a year were more likely than other income segments to cut back in these areas (27% for SVOD and 23% for pay TV).

“Domestic TV and video subscription growth was slowing before the recent wave of inflation,” notes Geeson. “But the rising costs of consumer goods and services, as well as housing… put even more pressure on consumers to reduce these expenses.”

Nor is TV the only form of entertainment being curtailed — even larger numbers (36%) report having cut back on movies, concerts and sports events.

However, not surprisingly, given that fuel and food have been hardest hit by inflation, those are the areas of expense cited as having been cut back by the most survey participants: 59% are dining out less, and 53% are driving less.