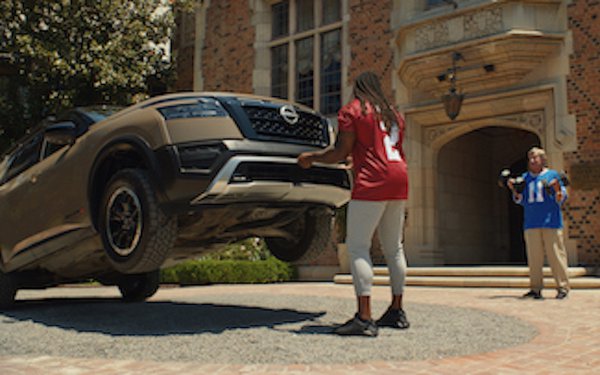 This year, fans will get a closer look at the competitive and spirited sides of their favorite players, while welcoming a college-level athlete into the fold for the first time.

Ads begin airing on Sept. 1 on ESPN and continue across ESPN2, ABC, FOX, FS1, CBS, CBS Sports Network and during Monday Night Football on ESPN. The spots will also be featured on Nissan’s website.

“The writing behind these spots continues to naturally showcase each player’s unique comedic talents, providing a glimpse into a side of their personalities that can be well hidden when they are on the playing field,” Witherspoon says in a release.

Fans are encouraged to join in for a series of “That’s How You Heisman” polls, quizzes and challenges on TikTok, Twitter and Instagram.

The initial spot for the campaign is titled “That’s How You Heisman” where Tebow shows Young around, as other Heisman veterans engage in competitions: Henry and Palmer pushing sleds through the hall; Sanders and Murray in a college painting duel and Howard and Mayfield playing cards.

The spot highlights the 2023 Nissan Ariya, with Young arriving to the house in the all-electric crossover. The all-new Ariya also is featured in the “Generation Gap” spot where Coach Spurrier needs guidance on how to charge the Ariya, and Smith and Young are equally unsure of a
“connected” phone.

More content will be available on Nissan and ESPN digital channels, including behind-the-scenes footage and bloopers from the shoot.

At TheHeismanHouse.com, fans can take part in a virtual Heisman House world, creating a custom avatar and virtually interacting with favorite athletes and mascots. Users can explore an immersive environment full of Heisman hijinks, campaign Easter eggs, and interactive games that test skills against different players in the house.

New interactions and competitions will be added throughout the season. Additionally for the first time, the Nissan Heisman House offers fans the opportunity to access exclusive NFTs featuring distinctive artwork of Heisman greats highlighted in this year's campaign.

Nissan is making these Tokens available to fans at no charge, and a few fans will get to unlock virtual experiences with Heisman winners and receive a custom avatar Token. Details including Token drop dates will be available at TheHeismanHouse.com and CAMPUS.io in the fall.

Nissan is expanding its reach with the addition of Jackson State University, a HBCU (Historically Black Colleges and Universities).