While Netflix’s reported overall subscriber losses in this year’s first and second quarters made headlines, the streamer actually outpaced other leading subscription-based video-on-demand services in mobile app installs between May and July this year, according to a just-released InMobi analysis of first-party North American mobile user data.

Prime Video saw a spike in uninstalls between May 31 and June 2, apparently due to an app crash issue. 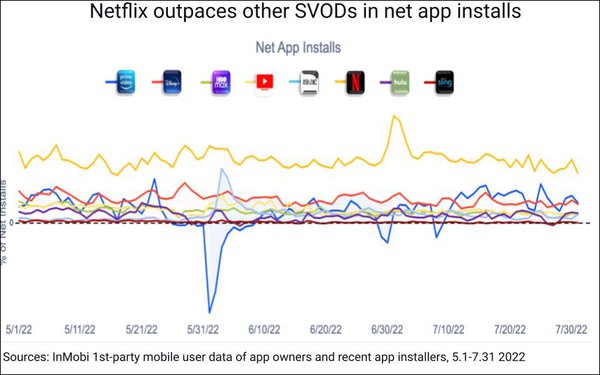 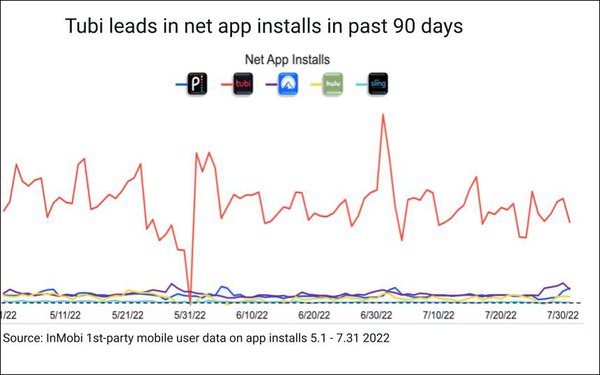 InMobi also analyzed app crossover among app “owners.” crossover. (App “owners” were defined as those who had a given app installed on their mobile devices for the duration of InMobi’s research, while “installers” were those who added an app during the May to July period.)

Among SVODs, HBO Max and Starz, and Netflix and Hulu — all heavily into producing premium original content — have the largest crossover in app ownership — underscoring that “content is still king,” in InMobi’s assessment. 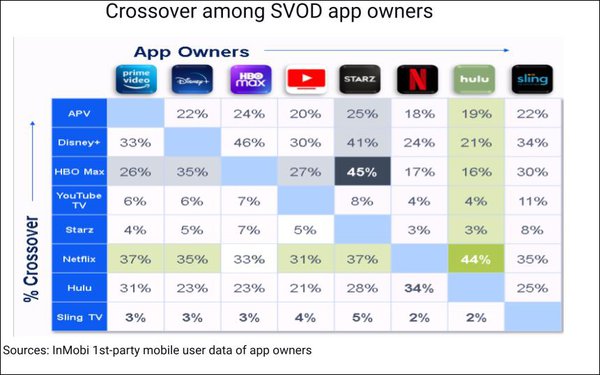 Sling TV had the least amount of crossover with app ownership with both AVODs and SVODs — possibly due to the lowest use rate, notes InMobi. 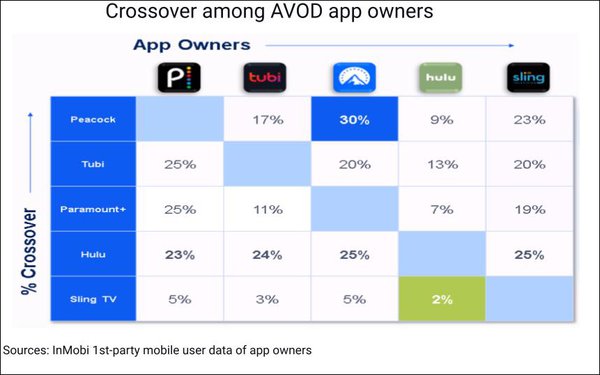 An analysis of InMobi’s app data for the full first half also yielded these insights about SVOD owners and installers:

Disney+ and HBO Max have the largest share of users 18 to 35, while Hulu owners skew 46 and older.

Both owners and installers of the AVODs analyzed have a concentration of users in the $50,000 to $74,900 income range. YouTube TV owners skew more affluent.

SVOD owners and installers are a bit more likely than their AVOD counterparts to have “some” college (roughly one-third).

Although white consumers are the dominant owners and installers of the SVODs analyzed (roughly two-thirds or more for most of the services), Blacks comprise 30% of YouTube TV owners and 26% of Starz installers.

Additional insights about AVOD apps include:

Among app owners, more men than women now have the Amazon Prime Video app — the opposite of the gender trend found in2021.

More men own Tubi and Sling TV apps, although Tubi, as well as Peacock and Hulu, grew their female ownership bases during the six-month period.

Peacock and Sling have the largest shares of app owners ages 18 to 45, while Tubi and Hulu skew to those 46 and older. However, Hulu app installers skewed much younger than its owners.

Similar to SVODs, both owners and installers of AVODs have a concentration of users in the $50,000 to $74,900 income range. Sling TV app installers have the largest share of users with household incomes above $75k+

Both owners and installers of AVODs tend to have an education level falling between high school and “some” college. Sling TV installers are more likely to have a bachelor’s degree.