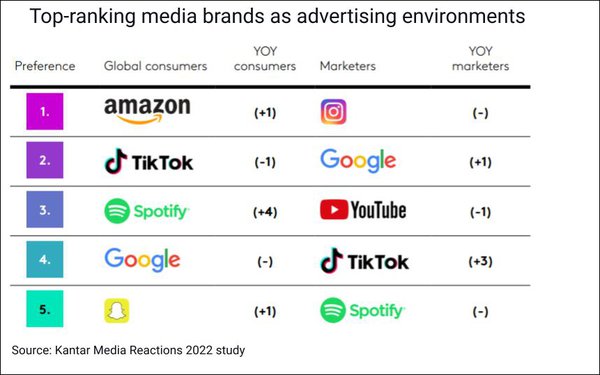 Amazon has eclipsed TikTok as the global media brand in which consumers are most receptive to ads, according to Kantar’s third annual Media Reactions study analyzing brand equity trends.

Among marketers, Instagram remained the top-ranked media brand as an advertising environment, and TikTok rose three positions to a No. 4 ranking. Amazon didn’t even make marketers’ top five.

Among media channels as a whole, sponsored events were the big winner in terms of perception gains among both consumers and marketers.

The 2022 study is based on surveys of more than 18,000 consumers in 29 markets, covering nearly 400 brands and nearly 90% of global media spend, along with interviews with nearly 1,000 senior advertiser, agency and media company marketing executives.

Amazon increased its ads’ perceived trustworthiness this year and, along with Facebook, YouTube and Spotify, led gains in advertising equity. Amazon is “leading the way as an advertising platform,” with consumers in many markets now viewing it as the most relevant and useful brand, reports Kantar. Amazon is the most-preferred brand among consumers in Germany, Italy, Egypt and Colombia, and in the top five in four other markets.

Amazon is “a great example of the strength of ecommerce as a channel,” the report observes, noting that Mercado Libre, which is highly preferred by consumers in Argentina and Brazil, is another example.

The study found consumers again expressing concerns about excessive targeting by Amazon, though these concerns moderated a bit versus last year.

But Amazon needs to do more to convince marketers of its value in order to take its success as a media brand to the next level, Kantar points out.

Spotify was the brand that saw the greatest gain in consumer perceptions of advertising environments, jumping four places in that ranking. Among marketers, Spotify remained in the No. 5 position.

Sponsored events gained one ranking among consumers to become their top-ranked advertising environment. Consumers continued to favor magazine ads (up one position, to No. 2) and point-of-sale ads (stable at No. 4). Cinema ads dropped two slots, to No. 3, while DOOH gained two slots to rank No. 5. 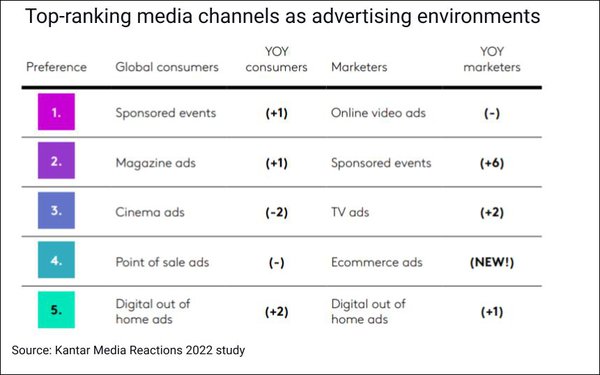 Consumer ad equity rankings increased for nearly all channels this year, with the exceptions of podcasts, TV product placements and newspapers. 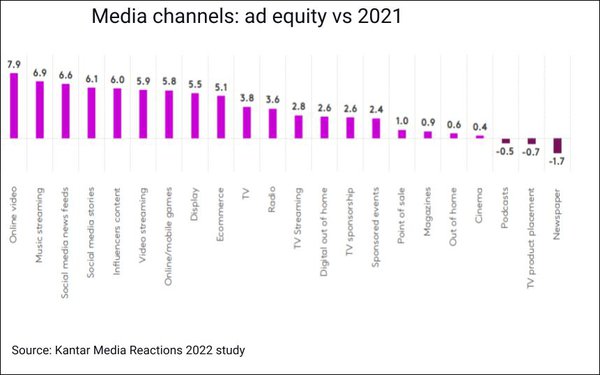 In the digital world, influencer content replaced podcast ads as consumers’ preferred ad format, and ecommerce ads gained one ranking, to reach No. 2. Social media story ads and music streaming ads each gained a position, to land as No. 4 and 5, respectively.

Despite consumers' preference for offline platforms, online video, video streaming and social media stories are the top three channels marked for more spend, with a net increase in budget allocation in 2022 and 2023, followed by marketing in the metaverse, which marketers say they will increase by 61% in 2023.