YouTube Shorts Monetization Could Be A 'Big Success,' Analyst Predicts 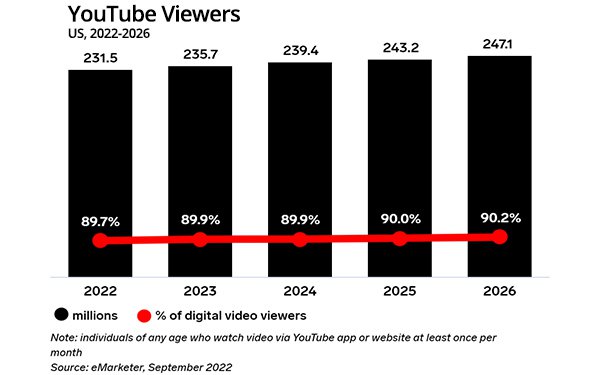 Google has built YouTube into the dominant player in the over the top (OTT) video market, especially in the United States. The company is expected to grow viewership by 2.3% to 231.5 million this year in the U.S., compared with 2021, according to data released Tuesday by Insider Intelligence.

YouTube’s viewership adoption is growing fastest among the youngest and the oldest demographics, according to Insider Intelligence Analyst Zach Goldner.

“The company’s greatest challenge will be its ability to retain engagement among its users as it begins to monetize its YouTube Shorts product in the first half of 2023,” Goldner wrote in an email to Search & Performance Marketing Daily. “YouTube’s advertising revenues have underwhelmed vs. consensus estimates so far in 2022. The monetization of shorts could be a big success for the company as it attempts to boost its original content by luring creators with a revenue split for YT Shorts of 45% in addition to the existing $100 million YouTube Shorts Fund.”

Neal Mohan, CPO at YouTube, earlier this month said there are more than 30 billion views from 1.5 billion logged-in users monthly. He also announced revenue sharing for Shorts and a new way to license music for creators to license videos and still get paid for video views under an ad-revenue sharing program.

As cord-cutting becomes more popular, some viewers have turned to YouTube as an alternative source to watch their favorite late-night hosts as well as local and national news content that they may no longer have access to on other broadcast networks.

As a result of YouTube’s focus on education, kid-friendly content, and free price tag, the platform has a much higher penetration among Gen Z compared to social networks or sub-OTT services, he explained.

It’s not clear whether YouTube service is growing organically or gaining viewers at the expense of other video platforms. Most of YouTube’s content is free. Insider Intelligence believes Netflix is losing viewers to lower-priced competitors that pour massive resources into content development, such as YouTube. Price increase and the availability of bundles and deals for other services have put Netflix at a disadvantage as consumers deal with soaring inflation.

Netflix now holds a 65.6% share of digital video viewers in the U.S., down from 68.4% in 2021. Next year, it’s expected that the company will grow its user base when it launches its ad-supported option.

“The ad-supported tier will be critical in attracting and retaining price-sensitive viewers,” wrote Oscar Bruce Jr., senior forecasting analyst at Insider Intelligence, in a research note. “This will allow Netflix to boost average revenue per user while avoiding — or at least limiting — future price increases.”