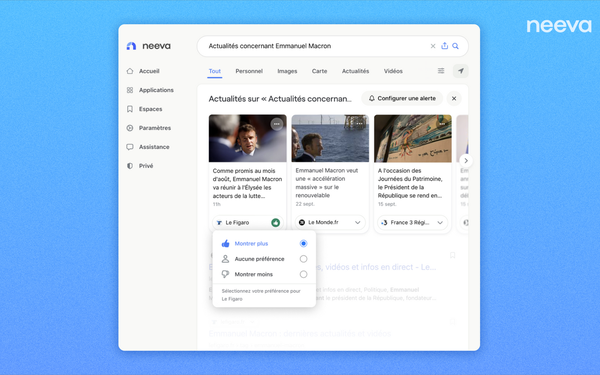 Neeva -- the search engine founded by two former Google employees -- launched today in Germany, France, and the United Kingdom. The move is intended to give those who seek information an ad-free platform to search for information.

The search engine also says it will have non-biased results, and that users will not be tracked. A custom feature also lets users prioritize or downgrade certain sites or sources, or link to accounts on sites such as Slack, to include personal files in search results.

Neeva’s expansion into Europe from the United States follows a $40 million Series B funding round in 2021. The engine was founded by Sridhar Ramaswamy, former SVP of ads at Google, and Vivek Raghunathan, former vice president of monetization at YouTube.

The engine became publicly available in the U.S. in June 2021. The rollout will have a similar structure in Europe, with a free model first, later introducing its premium subscription model with additional features such as a VPN and password manager. Neeva operates its own independent search stack, returning what the company executives define as “fast results with high levels of accuracy” by drawing from an index of billions of web pages.

In addition, Neeva enables users to connect personal applications like email, Google, Dropbox, Slack, Figma and others making it easy to search across the most important personal documents while maintaining strict privacy controls.

Neeva uses its own index and Bing to serve search results to users. It supports image, video, news and maps searches, and search suggestions. Premium users will have an option to connect to Slack, GitHub, Confluence, Jira, Box, Notion and Figma.