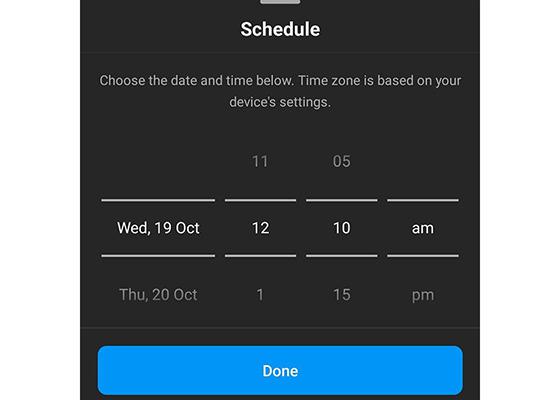 Instagram announced on Wednesday that it is testing an in-app tool that will allow a percentage of its global users to schedule posts and Reels.

This feature could be a key feature for social media managers and creators.

“We are testing the ability to schedule content with a percentage of our global community,” said a Meta spokesperson in a recent statement, but did not provide any further detail about the scheduling feature’s development or availability.

Creators and social media managers can already schedule their Live videos up to 90 days in advance of posting, but a feature has never allowed them to schedule grid posts ahead of time.

So far, to use the feature, select users prepare a grid post, then after they have finished editing, they will scroll down to the bottom and click “advanced settings.” From there, they will be able to “schedule this post” with options for the exact date and time.

App researcher Alessandro Paluzzi noted that Instagram began working on a scheduling feature back in July. Now the feature is being publicly tested.

In 2018, Instagram began allowing businesses to schedule posts through an application programming interface (API), inviting third-party software like Hootsuite to step into the role. Other third-party apps like Planoly, Buffer, and more allow anyone to schedule Instagram posts as well.

Meta actually made it possible to schedule Instagram posts via the Facebook Creator Studio in 2020, but this new feature would offer creators who don't have access to special software for social media management.

Twitter has provided this type of native scheduling feature since May of 2020.