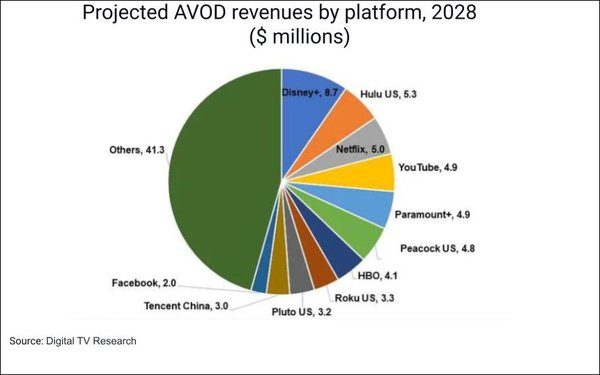 That will help drive total AVOD revenues up from $38 billion in 2022 to $91 billion in 2028 — with those four largest players accounting for a quarter of the total.

The forecast also projects that the top 10 countries will account for 81% of the world’s total by 2028, and that 15 hybrid platforms— six global, five from the U.S. and three from China — will each contribute AVOD revenues in of more than $1 billion.

Disney is forecast to reap the biggest windfall, with Disney+ (set to launch in December) yielding $8.7 billion by 2028, and sibling streamer Hulu yielding $5.3 billion, for a combined $14 billion annually.

China’s Tencent is forecast at $3 billion, Facebook at $2 billion, and others combined at $1.3 billion.