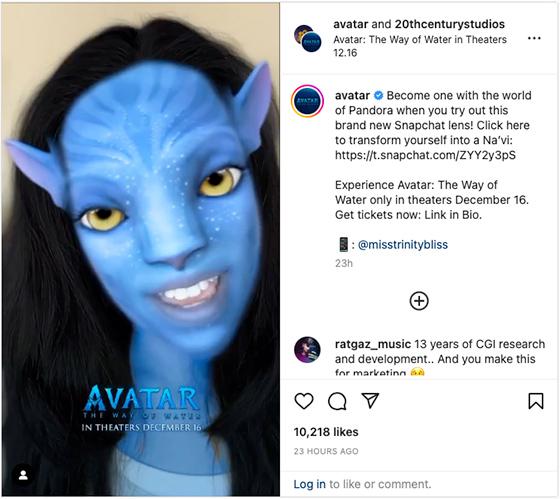 In anticipation of "Avatar: The Way of Water," director James Cameron’s long-awaited sequel to his 2009 blockbuster hit, Snapchat and Disney have partnered to create a custom augmented reality (AR) Lens that turns Snapchatters into one of the film’s blue characters known as “Na’vi.”

Users’ mouths, eyes, head shape, hair and skin will transform with the Lens, complete with a true Avatar blue-striped texture, as if they came straight from the film’s fictional planet known as Pandora. As Snapchatters move, the Lens will move with them.

Snap says that AR experiences of this kind are intended to invite Snapchatters to learn about film characters, explore new worlds, and experience directorial style and storytelling in a personal, immersive way.

According to social platform’s internal data, theatrical campaigns that utilize an AR Lens on Snapchat in 2021, in addition to their video buys, saw an average of 32% incremental reach.

In addition, brands that have branded AR experiences were 41% more likely to be considered by consumers.

Snap and Disney have partnered on multiple AR efforts, including in-park experiences like Disney’s PhotoPass service, a suite of interactive Lenses that transform park-goers into their favorite Disney characters, as well as activations using Snap’s CameraKit, which let users add photos to the Cinderella Castle Mural of Memories on the Disney World Resort’s 50th anniversary.

While the film will not hit theaters until December 15, the Lens itself became available globally on November 21.