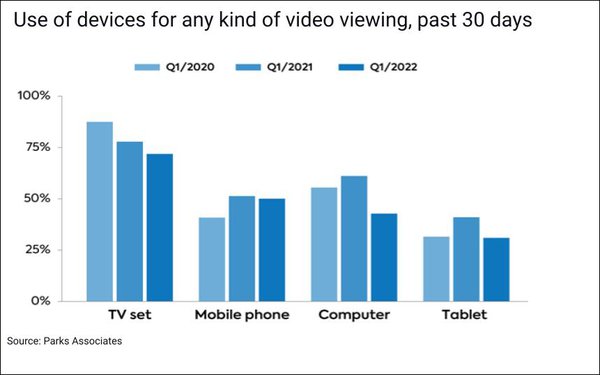 As of this year’s first quarter, nearly half of consumers reported watching video on mobile phones within the past 30 days — about flat with the number reporting the same in Q1 2021 (chart above).

Larger numbers still report watching video on TV sets, but the percentage has decreased steadily since 2020.

Subscription video-on-demand (SVOD) and livestreaming each account for about an hour per week of the mobile view time.

“The shift between platforms will push the industry to tailor services and content more aggressively to suit mobile phone viewers,” notes Elizabeth Parks, president and CMO, Parks Associates. “This changing dynamic will likewise increase the importance of AVOD offerings, which are already increasingly popular on mobile phones.”