When Is A Media Buy A Greenwashing Liability? When It's A Fossil Fuel Brand Sponsoring Climate Coverage 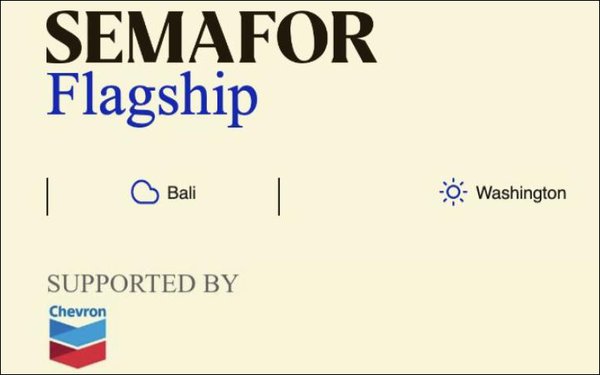 At a time when the greenwashing practices of agencies are drawing the attention of lawmakers, a group of experts and self-regulatory bodies Thursday made the case that even conventional media buys for fossil-fuel brands could be a serious liability, especially when they are placed in editorial coverage of climate change.

“It’s strings-attached sponsorship,” Ben Franta, a senior research fellow at the Oxford Sustainable Law Programme and an expert on greenwashing litigation, explained during a webinar hosted by the Institute for Advertising Ethics (IAE) Thursday.

The webinar -- the second of two held by the IAE since Congress began holding hearings on the role that advertisers, agencies and PR firms play in greenwashing the reputations of fossil fuel brands -- was focused on providing a framework for mitigating the practice in order to help the industry self-regulate itself and avoid regulation and potential liabilities.

The "Integrated Framework for Assessing Greenwashing" was presented by one of its co-authors, Steph Hill, a lecturer in PR/promotional media at the U.K.'s University of Leicester. It is a sophisticated and nuanced taxonomy showing that greenwashing falls on a spectrum ranging from blatant lies to misleading claims and omissions of facts that distort the public reputations of the role fossil fuel brands are taking vis a vis climate action.

Havas' Downing singled out IAE's principle No. 8 -- "Advertisers and their agencies, and online and offline media, should discuss privately potential ethical concerns, and members of the team creating ads should be given permission to express internally their ethical concerns." -- as a guiding one for greenwashing practices.

All of the speakers agreed it is necessary that agencies begin pushing back when fossil fuel clients ask for campaigns and media buys that exaggerate the role they are playing in climate change, both explicitly and implicitly, as in the media buy example cited by Oxford's Franta.

Havas' Downing said the IAE's principle should be brought to life during the earliest stages of the campaign and media strategy process, when fossil fuel clients issue their briefs to agencies and PR firms for developing them.

A recent report on greenwashing compiled by a House subcommittee singled out a $5 million media buy IPG Mediabrands' UM unit made to place a native content campaign for client ExxonMobil in The New York Times.

During the IAE webinar, speakers also called out recent news that the climate editor of digital news startup Semafor left after complaining about Chevron's sponsorship of its climate coverage. In a tweet late last week, the former editor, Bill Spindle, described it as "an over-dependence on Chevron sponsorship," though he also said Chevron never "improperly influenced" his coverage.

"We decided to part ways with Bill due to issues that were unrelated to any advertising partnerships, Semafor said in a statement provided by a spokesperson, adding, "Semafor adheres to robust ad acceptability guidelines that we stand by, and that are industry standard. We did not remove advertising due to editorial requests and have a number of rotating sponsors of the climate newsletter.”

However, Havas' Downing described the scenario as "an element of co-opted distortion from the brand itself."

Oxford's Franta added, "The problem isn’t the sponsorship, per se... It's he misleading communication."

Franta acknowledged that implication "comes in degrees," adding that when it's sponsorship appears in or adjacent to a climate news story,"'Brought to you by Chevron," that's giving a misleading impression by association."

Of all the criminal and civil greenwashing liabilities he has tracked to date, Franta said he is unaware of any being levied against an ad agency explicitly.

But he emphasized "not yet, because the law does evolve and there are a couple of cautionary notes to place on this."

Specifically, Franta cited a $587 million settlement McKinsey & Co. made with a group of state attorneys general for its role as a strategic advisor to Purdue Pharma to help market its OxyContin painkiller, which contributed to the opioid crisis.

"McKinsey in this instance, was held liable, so I think that strikes a cautionary note in this space, as well," he said. 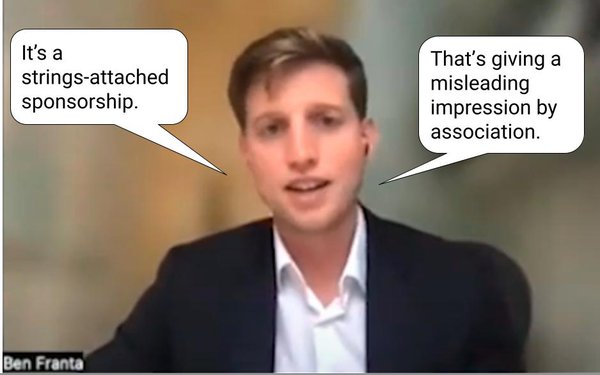