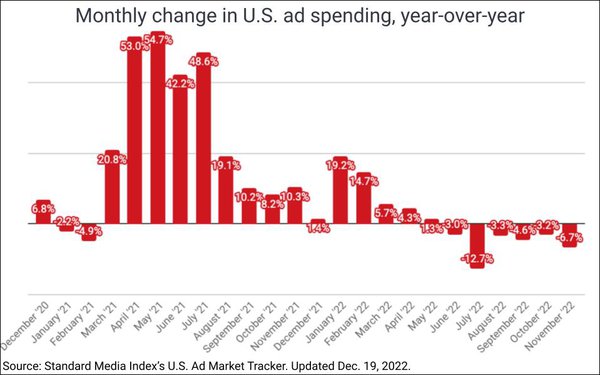 The U.S. ad market fell 6.7% in November, marking the sixth consecutive month of declines and giving impetus to the notion that the ad industry is in recession, according to MediaPost's analysis of data from Standard Media Index's (SMI) U.S. ad market tracker.

Historically, economists have defined economic recessions as two consecutive quarters of declines, though the National Bureau of Economic Research has adopted a more nuanced definition.

Moreover, SMI noted this November compares with November 2021, which is the largest month of U.S. ad spending ever recorded in its database, and the only one ever to exceed $4 billion in monthly ad spending.

The year was "front-loaded" with ad spending due to the Olympics and NBA finals, SMI Director of Advertising Insights Nicole McCurnin noted.

Year-to-date, SMI's core data -- which is derived from the pool of big agency holding companies and major independent media-buying agencies that contribute their actual ad-spending data -- which tracks better with the 7.4% consensus the major agency holding companies are estimating for full-year 2022 ad spending, based on their recent year-end revisions.

SMI's pool data is a slightly different representation of U.S. ad spending than the U.S. Ad Market Tracker, which is a composite index akin to Wall Street's market index's. It is meant to be looked at over time to understand broad market shifts in the underlying U.S. ad economy.

And MediaPost's analysis of the index reveals a couple of significant shifts, including a marked rise in the share of U.S. ad spending coming from smaller ad categories, as the top 10 have waned over time.

Looking at the six years of November index data currently represented in the index, the top 10 ad categories have fallen from a 50% share of U.S. ad spending in 2017 to a 43% share in 2022. 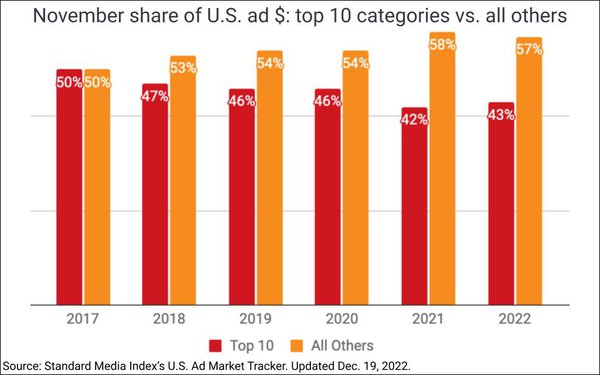 Another not-as-surprising market shift has been the persistent rise of digital advertising's share, which has grown from a little more than a third of U.S. ad spending in 2017 to well over half (see chart below). 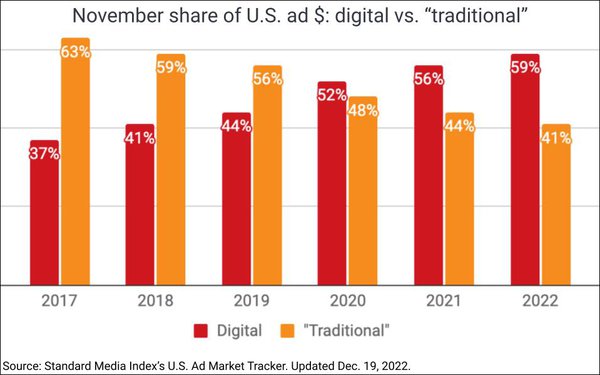