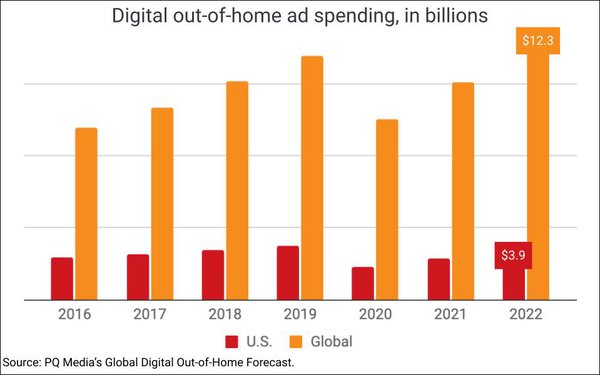 After declining precipitously in 2020 due to the disruption of the COVID-19 pandemic, digital out-of-home ad spending rebounded in 2021 and 2022, reaching all-time highs last year in both the U.S. and worldwide, according to new estimates released this morning by PQ Media as part of its Global Digital Out-of-Home Forecast.

Digital out-of-home was hit worse than the overall out-of-home advertising market it is part of during the recession, but has outperformed its rate of growth coming out of it.

Within digital out-of-home, place-based networks are expanding most rapidly, increasing ad revenue 24.9% worldwide and 39.9% in the U.S. in 2022.