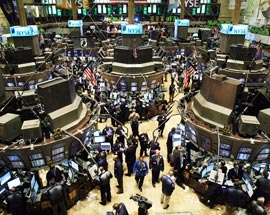 A Yahoo mobile and social campaign for the New York Stock Exchange generated click-through rates 50% greater than a standard mobile campaign, and Facebook “likes” increased by 92% and Twitter followers by 13%.

Creative offered straightforward, highly directed calls to action. Ads encouraged users to check out the NYSE’s WAP site where they could watch videos to hear from CEOs of recent NYSE tech IPOs.

"We will consider mobile advertising in the near future," Chandra Keyser, NYSE director of global marketing and branding, tells Marketing Daily. "Strategically, the mobile ads of this campaign drove audiences to our social channels and we were pleased with the cross-platform leverage. I expect we will attempt to integrate other media channels, too."

The smartphone campaign ran across Yahoo Mobile and Yahoo Mobile Finance, featuring creative that offered straightforward, highly directed calls to action. The NYSE was quick to recognize the power of social media as well as mobile when calling on its target audience to act.

That’s why the Yahoo Mobile-Media Contacts solution offered one of three paths for users to engage with NYSE, each with a tailored message. These messages were rotated throughout the campaign.

“One of the great things about mobile is its efficiency,” says Keyser. “And our Yahoo Mobile campaign helped us reach our target audience where they lived at scale.”

The campaign ran from July through October.