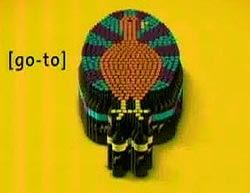 Yellow Tail Wine led the pack among the 10 best-scoring holiday TV spots for alcoholic beverages aired during the past 30 days, according to Ace Metrix.

The 15-second spot shows scores of Yellow Tail bottles gobbling away as they scramble to arrange themselves into the shape of a turkey, and positions the wine as the “go-to” choice for Thanksgiving. Voiceover message: “Go-to…gobble, gobble, gobble. Always a favorite for Turkey Day. Yellow Tail — The Go-To.”

First aired on Nov. 19, the spot pulled an Ace score of 494, well above the alcoholic beverage category’s score norm of 472. It scored particularly well on attention (657) and likeability (610), and also outperformed the category’s norms of 545 and 537 on watchability and persuasion, with scores of 568 and 550, respectively. The ad’s top demographic: males 36 to 49.

The runner-up was Patrón tequila, with a 15-second spot from its “Eliminate regifting” holiday campaign that earned a 485 score. The creative simply shows a hand placing a bottle of Patrón amid gift-wrapping paper and ribbons floating down from the sky, as a voiceover suggests: “This holiday season, give a gift worth unwrapping. Patrón. Simply perfect.” Screen copy at the end carries the “Eliminate Regifting” tagline. Top demographic: males 21 to 35.

However, Patrón’s other recent “Eliminate regifting” 15-second commercial, focused on conveying the ultra-premium tequila spirit’s being handcrafted from 100% blue Weber agave, scored below the norm with a 451 -- putting it at #8 among the top 10.

The rest of the lineup included: