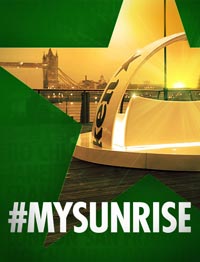 Heineken is launching the latest phase in its campaign to encourage the responsible consumption of its brands.

The new theme, "Sunrise belongs to moderate drinkers,” is a part of the "Open Your World" global campaign, which celebrates and encourages aspirational behaviors among adult consumers.

The Amsterdam-based beer company chose to launch this program during the holiday season (a time when parties are common) to maximize the message’s impact.

The initiative is running on Heineken's YouTube channel, Facebook fan page, and Heineken.com as well as broadcast. The program was developed by Publicis International and AKQA.

“This approach breaks from the norm of traditional responsible consumption messages and takes a progressive stance by showing that drinking responsibly can be aspirational,” says Alexis Nasard, Heineken’s chief commercial officer.

The campaign will use various online and offline media channels, with strong emphasis on social media. In the 85-second film, "The Sunrise," Heineken’s hero demonstrates how to celebrate the night to the fullest, including turning down a beer and choosing a bottle of water instead.

The campaign was unveiled Nov. 28 through a teaser in London, Ho Chi Minh, Rio de Janeiro and San Francisco. Sofas featuring the hashtag #MYSUNRISE were strategically placed in locations that offered the best sunrise view. People were encouraged to post photos of their best sunrise moments, tagging them #MYSUNRISE and then sending them to the Heineken Facebook page.

The Enjoy Heineken Responsibly section on the Heineken.com is translated is into 32 languages in 46 markets and provides information about responsible consumption.