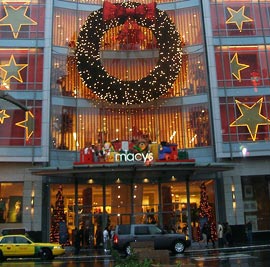 A new Visa survey showing that 77% of consumers still aren’t done shopping has retailers jumping through holiday hoops to catch the last of Santa’s spending. With extended hours, stores like Macy’s and Toys R Us are staying open around the clock, hoping to cash in on the $278 each of these 11th-hour shoppers are expected to spend.

The survey, fielded over the weekend, finds that 13% of consumers hadn’t done any shopping by the beginning of the week, 8% still had three-quarters of their gifts to buy, 16% are half finished and 51% say they plan to purchase a quarter of their gifts this week.

"With this many Americans still desperate to buy gifts, we are officially in the red zone for 'panic shopping'," Jason Alderman, Visa's Senior Director of Global Financial Education, says in its release. "When shoppers panic, they throw money at the problem and often overspend to get a gift – any gift – in time for the holidays."

At least, that’s what retailers are hoping for, and stores are a little desperate themselves, sending a record number of emails, reports Responsys, a marketing software company. Tracking 100 of the nation’s top retailers, the company says that the average retailer sent subscribers 5.6 promotional emails last week, an 8% jump week-over-week, and a 26% hike year-over-year. In fact, it says email volume last week matched the all-time high hit during the week of Cyber Monday.

Stores are also extending hours to bring in more of the holiday lollygaggers. Macy’s, as it has since 2006, will pull three all-nighters, with many of its stores staying open for 83 hours straight, closing on Christmas Eve at 6 p.m. (Other stores will remain open until 2:00 a.m.)

And Toys“R”Us elves will be drinking even more coffee, with the toy retailer announcing that it will stay open for 112 uninterrupted hours, and stay open until 10 p.m. on Christmas Eve.