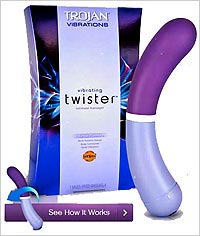 Last year saw Top 10 stories about Trojans, Durangos, cause marketing, apps. A mixed stocking-full of items. It all suggests that readers are watching mobile, grassroots, and cause marketing, but still love the odd study and the well-executed ad campaign. To wit:

A bright purple "Good Vibrations Truck" was condom maker Trojan's grassroots efforts to mine the food-truck phenom to tout its line of three vibrators, which went on sale at merchandisers in 2011. The truck was paired to the www.TrojanVibrations.com Web site, a new Trojan Facebook page devoted to the line of three vibrators, and a "What's Your Vibe" iPad app. Sexologist Logan Levkoff also participated.

This story on marketer presentations at the Conversational Marketing Summit in New York this summer was big in 2011. Although RIM is now trying to sell itself, Brian Wallace, VP of global digital marketing at the maker of BlackBerry, said the firm was the fastest-growing online brand in the world, the second most social brand, a top ten brand and number one mobile brand on Facebook, and a top-five brand on Twitter. Shiv Singh, head of digital at PepsiCo, said if he could just get a piece of the 30 billion or so Facebook status updates published in a given month he'd be doing well -- but he conceded that it's hard to do.

3. U.S. Census Is All About Hispanic, Local

New Census numbers came out starting in March, revealing some major demographic shifts that mean local implications for national brands. For the first time, the Census in 2011 put out annual small-area data looking at occupational distribution, educational attainment, commuting patterns, housing, and socioeconomic status. Robert Groves, director of the U.S. Census Bureau, said in prior years the Census served up "a big dose of data every ten years, which has been less and less valuable as the years passed." The new "American Community Survey" is based on a regular poll of three million households. How about the new data? He said the big picture from new Census data is that population is at a 9.7% growth rate, its slowest growth since the Great Depression. The other major finding is the growth of the Hispanic population and its migration from cities to towns and suburbs.

If a story centers on a new app, it's going to be read, at least until the next cutting-edge strategy. In the spring, Toyota launched a new social-media platform called "Toyota Friend,” a network for Toyota customers that includes a real-time Internet connection to their vehicles, dealers and Toyota itself, and a social media platform connecting owners to each other. The Toyota Friend, which represents collaboration between Toyota and Salesforce.com, is powered by Salesforce Chatter, a private social network. At the same time, Salesforce.com and TMC said they would each make investments in Toyota Media Service (TMS), which oversees TMC's global cloud platform development. Salesforce.com invested ¥223 million and TMC ¥442 million. Microsoft Corporation, which on April 6 announced a strategic partnership with TMC to build a global platform for next-generation telematics services, invested ¥335 million.

This was a cool story, as it involves something that should appeal to anyone who's hungry and wondering where the hell his or her pizza is. Domino's resuscitated itself by talking honestly about how crappy its pizza had been and then working to fix the problem. Dennis Maloney, VP multimedia marketing at Domino's, told the audience at the Association of National Advertisers' social media conference in New York that the crust, sauce and cheese weren't the only fix: the company had to alter how it presented itself to the public. In short, it had to integrate with social media; the company based its reinvention on transparency.

"Is everyone else doing what I'm doing?" marketing stories are always popular -- since if you already know it, you're smart, and if you don't, you're going rogue, which works in advertising, if not in politics. In this case, the story was how marketers boosted budgets in 2011, but with an eye to integration, alignment, visibility and (duh) ROI. This is per the CMO Council's fifth annual State of Marketing Report.

The Council, comprising 6,000 chief marketers in 110 countries controlling over $200 billion in annual spend, tapped over 600 of its members for the 2011 Outlook, Intentions and Investments report. Fifty-seven percent of respondents said at the time they would increase spend, and 26% said they would boost budgets between 1 and 5%, with social media getting the biggest percentage gain. Most said they would increase social-media investments by over 5%. But you knew that.

Loyalty was a big topic this year, as proponents of two schools were vociferous on the subject, to wit: 1) forget about loyalty. In this economy consumers are looking for value, and whoever offers the best bang wins the buck. 2) loyalty is critical in this market because consumers are looking, at least psychologically, to grab onto anything that retains some meaning in a meaningless Sartre-like world of existential uncertainty. Trusted brands are like capstans on a tossing, wave-soaked deck in a storm. Well, here's one for opinion number one. AMP Agency, a Boston-based branding firm, argued that few consumers between the ages of 25 and 49 are moved to purchase by habit, or sentimental considerations for a brand.

The study, based on a Fall 2010 poll of 865 Gen X and Y consumers, looked at what happens in the "consideration phase" of the purchase path. AMP found that just 3% of consumers say they are loyal to a particular brand and never buy anything else.

This is the story that will make me famous one day. But I won't be able to write the book about it; David Edelman of research firm McKinsey & Company gets to do that. But maybe he'll give me credit for coming up with a visual metaphor of his purchase-cycle analysis. In brief, Edelman (speaking at a CMO Council event in New York) argued that the traditional purchase funnel is dead as a practical cognitive structure for how consumers go to market. He pointed out that the dance between consumer and brand is circular and continuous. I suggested his visual interpretation looks like a bialy -- but now, as I write this, I realize that given the perpetual motion involved (consumers continue and often deepen their activity with a brand after the purchase through digital advocacy) the better metaphor is probably a Mobius strip. David?

9. Consumers More Critical Of Cause Marketing

With the world bruised in more places than a Macintosh apple at the bottom of the crate, cause marketing is big now. The popularity of this story on a trend report from JWT's JWTIntelligence and EthosJWT suggests readers are interested in how major brands like PepsiCo and Timberland -- not to mention P&G -- are making global altruism central to their brand ID. And how suspicious consumers are about self-aggrandizement. The JWT divisions interviewed experts and influencers from the nonprofit and corporate social responsibility sectors, and surveyed 908 adults ages 18-plus.

The results reveal that "goodwashing" is bad. Amorphous claims of goodwill activities no longer cut it. The firm says consumers now expect greater accountability from nonprofits and brands involved in cause marketing. Consumers now want to know where the money is going and the impact it has. More transparency will mean a greater focus on effecting real change.

I love a good ad campaign, and I especially love a good back-story -- and so do you, judging by the popularity of this story about the third-quarter 2011 Dodge Durango campaign. The ads put Durangos on an abandoned NASCAR track in Georgia. The campaign, via Wieden + Kennedy, had 10 spots, 6 on TV and at least 4 online. The effort, which offers a different interpretation of the SUV, had a "Long Lost Performance" theme and used Michael C. Hall -- Dexter Morgan from Showtime's "Dexter," and David Fisher in HBO's "Six Feet Under" -- as edgy voiceover talent.

The back-story? The ads are set at the abandoned Middle Georgia Raceway in Warner Robins, Ga. where Bobby Allison once won a Grand National NASCAR title. The raceway, which closed in 1984, was a regular on the NASCAR circuit until the late 1960s, when authorities found a moonshine still under one of the turns.